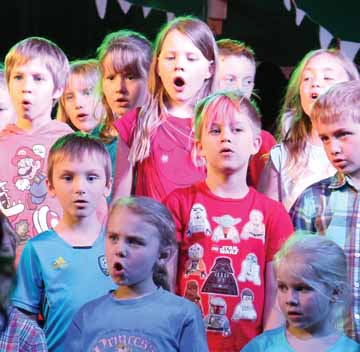 By Jamie Rieger
It was an afternoon of celebration when Bow Island Elementary and Senator Gershaw schools officially marked the completion of the modernization projects at both facilities.
The project has been a long time in the making according to Prairie Rose School Division chair, Stuart Angle who used to teach in Bow Island and represents Bow Island schools.
“Talks about  new school started in the fall of 1992 and in 1993, the lobbying began in earnest. Fort the six years, the community was growing and so were our classrooms. Space was at a premium. We had two classes of each Grade and this was at a time when no new schools were being built,” said Angle.
An initial study was done in 2004, with a second one four years later. In 2009, the report indicated that it would be better to renovate the two schools, rather than build a new one.
Work on the $13-million dual project began at Bow Island Elementary in 2011 and in 2013 for Senator Gershaw, whose students have been in their new school since last fall.
Dignitaries at the celebration included PRSD trustees Kathy Cooper, Arnold Frank, Bob Wickens, and Cathy Hogg; Bow Island councilor Alan Hyland on behalf of mayor Gordon Reynolds; Ron Taylor from Alberta Education, on behalf of Education Minister, David Eggen; and PRSD Superintendent Brian Andjelic, among others.

PHOTO BY JAMIE RIEGER-Students and teachers from Senator Gershaw cross the stage in style during the official ceremony marking the completion of the modernization projects at SGS and Bow Island Elementary schools. 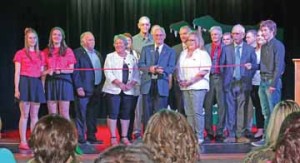 PHOTO BY JAMIE RIEGER- With Senator Gershaw students holding the ends of the ribbon, and flanked by PRSD and local dignitaries, Stuart Angle (centre), board chair, cuts the ribbon. 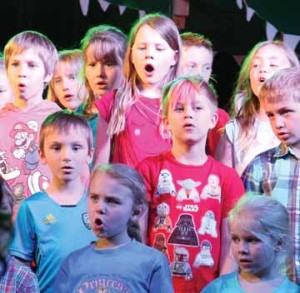