Massacre slays them all at Cypress Hills Park 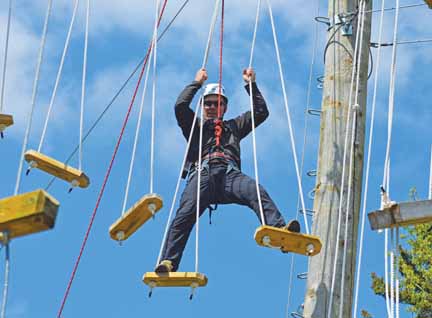 PHOTO BY TIM KALINOWSKI- Noel Johnstone came all the way from St. Albert to test himself to the max at the Medicine Hat Massacre at Cypress Hills Park on Saturday. Over 50 teams took part in the gust-busting event which covered nearly 100 km of kayaking, biking, running, and climbing.

By Tim Kalinowski
The Medicine Hat Massacre took place in the Cypress Hills this past Saturday. Over 50 teams came from all over the province to be a part of one of the most difficult and challenging outdoor endurance races in Alberta. Teams had just nine hours to complete three major events in the nearly 100 km long course.
The day started out at 4:00 a.m. with a starlight 12 km kayak race around Elkwater Lake. Teams had to paddle around the lake using a compass bearing to find the various way station markers left concealed on the shores by race organizers, and tag into the electronic marking system to gain points.
After the water portion, teams had a choice of trails to hike with varying degrees of difficulty, much of it bushwhacking to find concealed markers in the woods. The higher degree of difficulty attempted and completed, the more points the team could accrue.
The final leg of the course was a 68 km bike loop. Teams who had extra time remaining before the 1 p.m. end time could also challenge a high rope obstacle course near the finish line at the YMCA camp at Elkwater.
Medicine Hat Massacre race director Gerry Prynce said the event was a huge success again this year despite having a few fewer teams than previous years. Many of the usual slate of returning teams are first responders who are tied up helping out in Fort MacMurray helping with the wildfires there.
“We couldn’t have asked for better weather… We like to mix it up and challenge our racers to have a different experience every time they come. It’s a great event. This year is our ninth annual event, and every year it gets better,” he said.
Debbie Johnstone from St. Albert was taking on the Massacre for her second year in a row. Johnstone said the race pushes her to her limits, and that is what she loves about it.
“It tests you,” she confirmed. “And it feels pretty awesome when it’s done. This was an incredibly challenging race this year.”