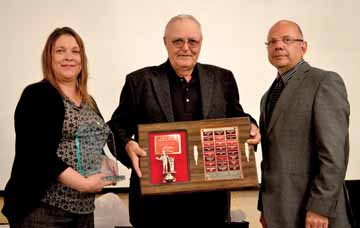 It is truly an honour to be a part of this event. Volunteers are such a big part of rural life and every small town community. Volunteers are the folks who pull together to organize events, work the grills at the arenas, host fundraisers for local causes, and lend a helping hand when somebody is in need.
In rural communities, volunteers are often the ones who maintain the arenas, curling rinks, and community halls so these events can be held.
They are also the first ones to lend a hand when crisis strikes a community. Just look at how quickly all Albertans came together to do what they could to help the people of Fort McMurray, or closer to home, how the rural community came together when the flood hit the region in 2010. Our dedicated volunteers will work tirelessly to help wherever and however they can, whether they are filling sandbags or collecting cash donations.
This year’s recipient of the Cypress County Citizen of the Year award is no different, and like all volunteers, dedicates his time as a way to give back to his community.
Don Won g is the past-president of the Irvine and District Agriculture Society and has been on their board for 15 years.
While he was president in 2014-15, he did a wonderful job of making the Irvine complex more accountable and in getting affordable improvements done.
Don also served on the board for the Irvine and District Curling Club for several years serving as chair from 2003-2006.
He is noted for helping to improve participation and in bringing fresh ideas to the board.
He has also served on the Pheasants Forever Board, holding the chair seat for a couple of years.
He currently sits on the subdivision and development appeal board for Cypress County, as well as the Forty Mile Gas Co-op board.
He and Caroline have two adult children who live in Victoria and Calgary. He bought his farm in 1978, moving there in 1991. As well as operating the farm, he worked for a number of years at Mid West Surveys.
Upon retirement, he started his Saskatoon business, a venture he began in 1996. The flood of 2010 caused extensive damage to Wong’s property and he spent a lot of time cleaning his home, yard, and saskatoon bushes. Despite all of the work at home, he still met all of his obligations with community work.
The persons who put Don’s name forward wrote in the nomination, “Don is there to help organize any function and to do any job required. While he was president of the Ag. Society, he was there regularly at the Irvine Complex, checking on things, making sure repairs were done correctly and timely, or to get forms filled out, or just whatever needed to be done. Don puts his heard into any board he sits on. He always uses the common sense approach to anything, and is good at getting the best from everyone.”