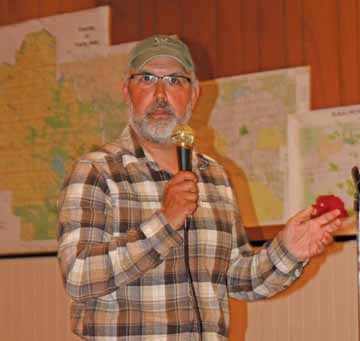 PHOTO BY JAMIE RIEGER- Don McKinnon, population ecologist for the Centre of Conservation and Research - Calgary Zoo, did little to appease the crowd at the SCA AGM last week when he provided an update on the Sage Grouse re-population program.

By Jamie Rieger
More education and public awareness is needed when it comes to the Species at Risk Act and other government initiatives was the main message presented when Sustainable Canada Association held their AGM at the Manyberries Hall on May 24,
Ross Ford, reeve of the County of Warner talked about the bio-diversity management plan and gave an update on the South Saskatchewan Regional Plan as Christine Sweet from Alberta Environment and Parks was unable to attend the meeting.
“I have been watching a lot of this happen. The EPO happened, the South Saskatchewan Regional Plan happened, then the Biodiversity Plan happened,” said Ford. “Last spring, Bryne Lengyel and I met with Gerry Ritz and he promised us they would review things if re-elected and we all know what happened then. Now, Katherine McKenna (federal minister of environment and climate) has the federal sustainability plan that proposes to enhance SARA. It is still in draft form, but includes more laws and regulations, and enforcement.”
Ford also talked about what is involved with having a species listed as an at-risk species.
“We need to understand where all this is coming from. There is a committee that meets annually and sub-committees made up of species specialists and when they make their decisions no regard is made to economic impacts. That’s not their job. All of the funding for this comes from Environment Canada. Once listed, there is a call out for bids, such as for a counts recovery plan,” said Ford. “We have scientists deciding whether other scientists are going to get a job.”
“It sounds like they are going to try to strengthen SARA, so it is really important for us to push back. This is supposed to be a democracy. This needs to be based on science, not philosophy or ideology.”
Randy Stokke, from Consul, talked about a Species at Risk program in Saskatchewan where $2.58 million has been made available for landowners, but is currently on hold for the time being.
“It is more producer managed and includes stock growers, industry, Nature Conservancy of Canada, the Saskatchewan Minister of Environment, and Environment Canada,” said Stokke. “Their hope is that this can be done without so much government influence. There is compensation for SAR. This plan just came out (last week) and includes 13 species.”
The program, Action Plan for  Multiple Species at Risk in Southwest Saskatchewan, is available for comment for 60 days.
“There are a lot of things in there that are not quite right,” he said.
Access to land and confidentiality of information were two items Stokke said needed to be improved upon in the document.
County of Forty Mile reeve, Bryne Lengyel attended the meeting.
“You guys are on the right track. The biggest thing is education. There is such a separation between urban and rural. Our urban cousins no longer understand the rural,” said Lengyel. “It’s important we keeping moving forward.”
Ford also provided an update on the Biodiversity Management Plan, which falls under the South Saskatchewan Regional Plan and includes long-term objectives for terrestrial and aquatic systems.
“These objectives will be monitored by the Alberta government, which had a consultation period in December with the comment period ending at the end of January, 2016.
“The government needs to give people more time. Rural municipalities are on the ground and we have to be accountable to our electorate. This is what’s called regulatory creep and we are simply suggesting to the government that they start over,” said Ford.
“This is completely a top-down approach. At a SAR conference in Saskatoon, I talked to a number of government officials and every one of them said these protection orders are not what they want. It needs to be about cooperation, not coercion. We as municipalities are concerned they will download the costs to us,” he added.
Joel Nicholson, senior wildlife biologist, presented the group with an update on the EPO and the Sage Grouse relocation program, including the GPS systems that have been attached to the birds.
“The birds were captured at night, tested for disease and overall health, and fitted with solar-powered GPS units,” said Nicholson.
Nicholson gave an interesting overview of their flight habits; some traveling over 1,000 kms only to return to within meters of their original site, and others not wandering too far from home.
Don McKinnon, population ecologist for the Centre for Conservation and Research – Calgary Zoo took heat from some members of the audience when he was unable to provide in-depth details of the information on the Sage Grouse, He did however, talk about some of the trials and errors they have been facing.
“This is a project in progress and we are learning and improving on our methodologies,” said McKinnon.
Some of the lessons learned thus far have been to not put them on sod and to pad their carriers (after one died from hitting the top of the carrier).
Also, they learned that the Sage Grouse are not thriving on the sage brush that is being grown in pots for them and are currently being fed lettuce and bird pellets.
(See separate, in-depth article on the Sage Grouse presentations in next week’s Commentator).
The meeting concluded with an election of directors and a push of encouragement for further public awareness.