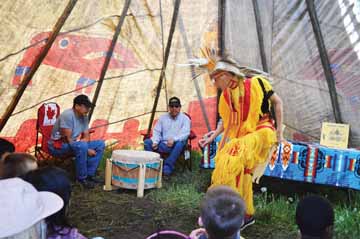 PHOTO BY TIM KALINOWSKI- Ben Lloyd demonstrates a "Grass Dance" for school kids while drummers, Radford Blackrider (right) and Shawn Redcrow lay down a beat. About 2,000 students visited the Elkwater Rodeo grounds last week to take in the four days of "History of the Hills".

By Tim Kalinowski
The four day “History of the Hills” gathering took place at the Elkwater Rodeo Grounds last week. The annual event brings together First Nations and Park representatives to teach school age children about the history of the Cypress Hills and aboriginal culture.
The weather was atrocious for the first two days, but the sun shone down brightly to close out the week. About 2,000 students from all over Alberta and Saskatchewan came out over the four days to circulate through a dozen stations showcasing a different aspect of aboriginal culture, local nature and regional history.
Most of those stations were in teepees which doubled as cultural showcases and classrooms. In one teepee students could learn about traditional trapping and hunting, in others they could hear stories and ask questions of First Nations Elders, in others they could look at traditional aboriginal regalia of the plains’ peoples or hear and see a drum dance. There were even stations dedicated to making bannock or learning how to strip logs to make teepee poles. The experience ended with all the students and presenters taking part in a traditional round dance and a powwow.
Elder Deborah Lloyd, who organizes the annual event, said “History of Hills” is intended to bring people together in a spirit of learning and tolerance.
“We want the groups to have very rich experience and a good understanding of aboriginal culture and history,” she said during quick break between her guided nature walks. “We have many groups of different cultures here, and we have over 450 kids here today (Thursday) we are herding through the venues, and they are doing a very good job of learning and understanding about different aspects of the history of the Cypress Hills area. We have had over 2,000 kids come through this week, and it’s been an absolutely fantastic experience for them; very rich.”
Deborah’s grandson Ben was putting on the traditional dancing display in a century old, Blackfoot decorated bear teepee alongside drummers Radford Blackrider and Shawn Redcrow. He wore bright yellow regalia with a tall feather bonnet on his head. He has been coming to help out his grandma (kookum) for the past seven years at “History of the Hills.”
“I like listening to all the presentations,” he said. “And I like dancing in front of kids because it teaches them more about my culture. And so they know I think it’s really important for them to know about it.”
Métis demonstrator Garry Hirsekorn and his wife Shirley were also happy to be helping out at “History of the Hills.” Shirley led the bannock cooking lesson while Garry talked about traditional trapping and hunting techniques used by Métis and First Nations’ peoples alike.
Garry said he loved seeing old friends every year at the event, but, more importantly, he loved teaching the kids about the hunter/ gatherer way of life so important to the early history of the Cypress Hills, and to many still living nearby today.
“I think it’s all about the kids,” he said. “It’s always enjoyable to teach them about this stuff.” 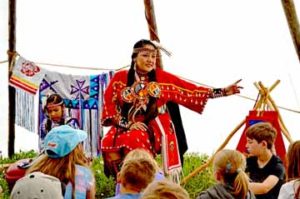 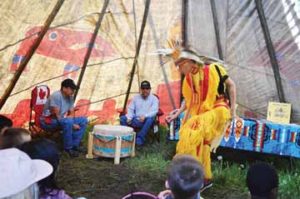 PHOTO BY TIM KALINOWSKI- Ben Lloyd demonstrates a “Grass Dance” for school kids while drummers, Radford Blackrider (right) and Shawn Redcrow lay down a beat. About 2,000 students visited the Elkwater Rodeo grounds last week to take in the four days of “History of the Hills”.