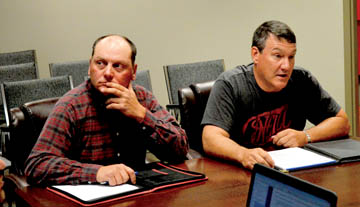 Photo by Tim Kalinowski- Bruce Johnson and Scott Pahl, from Redcliff Minor Hockey, made a delegation to Redcliff town council at their regular meeting last Monday night to ask council to revise rent fees at the Rec-Tangle.

Scott Pahl and Bruce Johnson of Redcliff Minor Hockey made a delegation to town council last Monday to ask councillors to revise the terms of the town’s financial agreement with the hockey association. Pahl and Johnson said Redcliff Minor Hockey was having trouble paying for its costs associated with being the major renter of Rec-Tangle. They pointed out ice rental fees have gone from $52/hour in 2012/2013 to $85/ hour in 2016/2017, a jumps of 39 per cent, while the total number of kids enrolled (about 100) has pretty much stayed the same.
In a letter submitted to council Pahl also explained that the cost of renting the concession stand in the arena, at $4,700 a year, was also not making them enough money to make up the difference. And the town had so far refused to put any money into much needed upgrades. He also pointed out Redcliff Minor Hockey has to pay $1,260 per year for the concession stand’s business phone line.
Pahl asked council on Monday if it would consider allowing them to get rid of the concession phone, reduce the $4,700 a year rate it costs to rent the booth, and help pay for much needed kitchen upgrades and the cost of installing WiFi to help Redcliff Minor Hockey remain viable in the community.
He pointed out the organization had already donated $10,500 to the arena for new lockers, donated new stick racks to each dressing room, had installed a new big screen T.V. with stand, constructed a new tournament board and went out on its own and found a $10,000 sponsor for a new sound system.
Council asked staff to look into the matter in more detail, and to bring back a financial assessment to figure out what could be done to help out Redcliff Minor Hockey at the arena.

Council approved, in principle, building new infrastructure to hook-up river valley subdivisions to potable water on Josephine Avenue, Sunvalley Drive and Sunvalley Court. The ambitious plan, put forth by the Town’s planning and engineering director James Johansen, calls for Redcliff to pick up the cost for 50 per cent of the phased in development cost, with local residents picking up the other half. The Town’s cost to link up the three areas would be about $81,000 per each phase, but the estimated tax revenue generated by the move would be between $978,000 $1.8 million a year depending on what options council opts to take, and what agreements can be made with river valley residents.
Johansen also proposed hooking up the Paramatta Valley subdivision across the river, which has been without piped-in potable water since last October, but the cost of this upgrade would have to be paid for totally by Cypress County or Paramatta Valley residents at an estimated cost of $470,000. Redcliff would also collect connection fees from the residents and would be asking that the Paramatta Valley Water Co-op’s water rights be signed over to the Town to provide the water needed.
Council approved the proposed plan unanimously.

Redcliff council approved the upcoming campaign, on the recommendation of Theresa Hardiker, executive director of the Economic Development Alliance, to come up with a new brand for Redcliff. A simple question will be put to the community from July through the end of September: What does Redcliff mean to you? Council is hoping the community will get engaged in this question and help return suggestions as to how Redcliff might rebrand itself going into the future.

According to the minutes from the May 24 meeting council discussed In Camera the termination of Redcliff Public Library Board member Brian Pattison. The contents of the discussion were not disclosed, but when council returned to the public session for the vote, Coun. Larry Leipert moved to terminate Pattison citing Town Bylaw 1680/2011 which states:
“Council may by resolution terminate the appointment of any member of the Board if the member is absent for more than three consecutive meetings of the Board.”
The motion was carried.