Redcliff Museum has new manager, new approach as it looks toward future 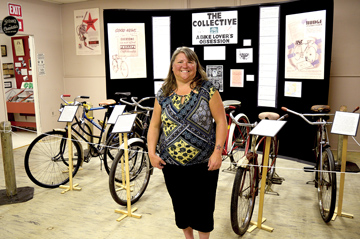 Photo by Tim Kalinowski- Redcliff Museum manager Keri-Anne Lawton shows off some of the classic Canadian bicycles currently on special display at the museum through the summer months.

By Tim Kalinowski
Redcliff Museum is looking to the future with a new manager, and a new approach to its displays and collections. Keri-Anne Lawton recently took over the position of museum manager. Lawton says she comes by her love of museum-craft and history honestly.
“My husband actually works at the Esplanade Museum; so I have kind of learned about museums by osmosis,” she says with a laugh. “When the opportunity came up to help out a little, local museum, it was simply the right time. I think the Redcliff Museum has some of the most superior items in it throughout much of southern Alberta because of the great quality, condition and the way the items are displayed. And the fact they have this beautiful building; we are very lucky to have this kind of preservation.”
Lawton says last year’s special display commemorating the 100 year anniversary of the Redcliff Cyclone put a bug in the ear of the museum board members: More special displays, more focus on presentation of the current collection and more public engagement. She points to the museum’s current historic cycle display as an example of this new approach.
“The volunteers here have so many great connections, so many longstanding ties in the community, that we can really take advantage of all their information and knowledge… My friend and board member, Tom Hulit, met somebody who has collected 166 or so antique bikes. He has been collecting since he was a young child. This gentleman is from Pincher Creek. His name is David Glass. We have arranged to gather through him the best of the best of Canadian bikes.”
Lawton says the display is designed to have a broad range of appeal.
“A lot of them are from the Canada Cycle Motor Company, so CCM is the more recognizable name. Some of them were sold through the Eaton company, and some of them look like they were built in Britain but they were built by Humphrey’s in Toronto. We range from a bike that was built in about 1912. It has a a really hard seat, but also the beautiful wooden rims. To something like the Coggs bike. That is just a gorgeous racing bike. It apparently goes so fast it is frightening to the average rider. It’s a beautiful looking bike.”
The museum has more special displays planned in the next year, and a new major edition to its permanent collection should be arriving soon.
“We do have an idea to do something for Canada’s 150th next year,” confirms Lawton. “We also have the 35th anniversary of the museum this year; so we want to do something for that. We also have a new First Nations exhibit going up shortly.”
Lawton says she is excited to be part of the Redcliff Museum, and to be working with volunteers and board members to make it even better than it is today.
“I think displays like this brings the idea that we are not just a small, local museum. We have an appeal for a lot of types of people from a lot of different areas. We are so lucky to have the space to change things up, and we are also going to be revitalizing some the older exhibits with new labels and things like that.”