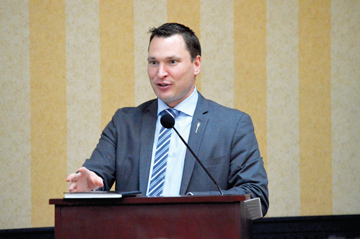 By Tim Kalinowski
The Palliser Economic Partnership (PEP) held its AGM last Wednesday afternoon at the Medicine Hat Lodge. The annual gathering of local officials, community representatives and economic development staff welcomed a special guest this year— Deron Bilous, Alberta Minister of Economic Development and Trade.
Minister Bilous spent all day in Medicine Hat, and a good portion of that at the PEP AGM.
During his opening comments to the assembled members Bilous called southeast Alberta a “poster child for the province” on regional collaboration.
“I am thrilled to be here,” he said, “and to acknowledge the work you have done for 15 years. Quite frankly, you have been vital to leading economic development.”
Bilous then got down to business re-articulating the government’s priorities and expectations going into an uncertain economy ahead.
“The last year the international price has dropped more than two thirds. As a result, we have experienced a very serious and prolonged economic shock, which, of course, we are all feeling.”
He spoke at length about the government’s desire to diversify the economy, and include more renewable energy generation to reduce emissions and “protect our health” by closing eight of the province’s 12 coalfire power plants by 2030.
He went on to say his government was committed to looking for solutions to lack of access to broadband in rural areas, saying only creative ideas were needed to see what comes next.
He ended his speech by talking about his government’s commitment to creating “economic resiliency” in the province, and how Regional Economic Development Agencies (REDAs) like PEP would be crucial partners in helping with that agenda.
Bilous then stood for questions and feedback from the audience.
Don Gibb, mayor of the Village of Rosemary, asked Bilous why funding to PEP and other REDAs had remained flat for so many years, given the crucial work they do across the province. PEP was forced to dip into its reserve funds this year to stay in operation.
“I do recognize REDAs haven’t seen an increase in some time,” acknowledged Bilous. “Not that this is a default answer, but I can tell you this (provincial) budget was extremely challenging as far as every ministry having to make cuts or bend costs… As far as the community development fund of $10 million and the regional development fund of $10 million, it hasn’t been completely flushed out yet as to how we are going to get that money out the door. I can tell you REDAs will continue to play a critical role in part of that.”
Barry Morishita, mayor of the City of Brooks, asked Bilous to put more details on the table as to how the government’s commitment to broadband will translate into practical steps on the ground.
“What specifically are you going to do to incentive-vize that to make that happen?” he asked. “We can’t wait. I am curious about how resources are going to come into the communities to make sure that happens?”
The room leaned forward to hear Bilous’s response.
“Broadband is a lot more challenging of an issue than I originally would have thought,” said Bilous frankly. “You are probably well aware of the agreement that we have with regards to SuperNet that’s coming to an end. If I can be frank about that program: It was a program that was not designed with the best interests of Alberta in mind. I think Albertans are continuing to see that.
“We want to look at what is the best way moving forward as far as how we are going to partner with all of Alberta to deliver that broadband connectivity. I can tell you I have had some discussions with the Minister of Service Alberta (which oversees the government’s broad initiatives) and the Minister of Infrastructure as well. We haven’t landed on how we are going to moving forward in 2018 when that (SuperNet) contract ends.”
Upon the question of increasing water storage in southern Alberta for irrigation posed to him by MLA Drew Barnes, Bilous took the opportunity to praise the local agriculture industry for its contribution to using water resources efficiently and contributing in an enormous way to the economic well-being of the region.
“There are opportunities to develop (efficient irrigation) technology, and to export it. We are world leaders in a number of areas. Our government recognizes the value of agriculture. I think we have huge opportunities to grow our sector. I was thrilled to here recently our cattle producers can now sell back into Mexico. That’s a significant win. (For agriculture), it’s not just on the side of increasing production but also ensuring we have that market access. As I mentioned previously, whether it be pipelines or trade corridors, they are absolutely critical to our province’s well-being. And we will continue to look at ways to access both.”
Barry Morishita, in his role as president of Canadian Badlands, then asked Minister Bilous to explain with tourism showing gains in the province of six per cent a year, on average, why the government would divert funding intended to develop tourism and stick it in general revenues in its last budget instead.
“The challenge with having a $10 billion gaping hole in our budget is that is a massive, gaping hole,” said Bilous. “Despite the fact that most ministries took a haircut, or more than that, through my ministry I do work closely with Culture and Tourism, and I agree with you that’s an area I think we have huge potential to grow… We are looking at doing a better job of leveraging our 12 international offices as far as promoting tourism to attract more visitors. I can tell you we do have some (new) money that is going into Culture and Tourism. Details to come.”