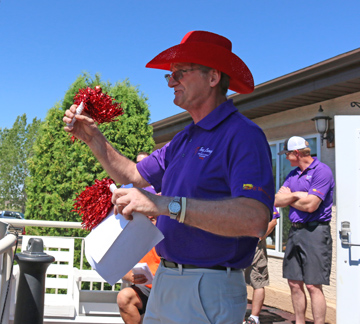 By Jamie Rieger
Once again, the people of Bow Island have pulled through for a community cause; this time, raising $90,000 for a new solarium at the Susan Andersen Library at the Troy Loney Charity Golf tournament.
Having a solarium for the patrons of the library was a dream of Andersen’s, who was the librarian prior to her passing last year and the project was a logic choice for the Troy Loney Charity golf tournament committee.
“It is still in the planning stages and we are working with the Town on this project because it is their building,” said Carla Robertson of the library board. “It will be a space for reading, enjoying the outdoors, and will give us added space for programming. We are really excited about it.”
Tournament committee chair Craig Couillard said the tournament got its start when local hockey player, Troy Loney won the Stanley Cup when he played with the Pittsburgh Penguins.
“The tournament started in 1991, the year after Troy won the Stanley Cup with the Penguins. We held a Troy Loney Day here to honour our hometown boy,” said Couillard.
Their inaugural event raised $6,000 and held the fundraiser for seven more years, until Loney retired from hockey.
In 2000, another event was held to raise money for the Troy Knibbs Memorial Fund.
“This continues to bear fruit today and this shows the impact of the generosity here,” said Couillard.
In talking of the dedicated volunteers and contributors to the tournament, Couillard said he was overwhelmed.
“Who does this? Who plans a charity golf tournament, jams 120 people onto a nine-hole course, with five-person teams and 300 people into the community hall? Everything was donated, prepared by volunteers, served by volunteers, and the bar was tended by volunteers,” said Couillard. “Then, to add to that, we decided to make it a Sportsman’s banquet. What other community does this? There are 120 items to be auctioned, but that’s still not enough, so let’s do a raffle. So, who does this? A remarkable community and remarkable committee, that’s who.”
In 2014, the Troy Loney Charity Golf tournament raised $80,000 in memory of Jackie Wilson for needed items at Pleasant View Lodge.
Loney was in attendance at the tournament and banquet; as was Carson Cooper, another hometown hockey hero, who played for Yale University.
“Bow Island is home to us,” said Loney in his address at the banquet. “There are so many good people here and I developed my work ethic and learned the importance of supporting the community by growing up here. You have set the ethics now for the next generation.”
Cooper too, said he values the encouragement and support he received as a young hockey player in Bow Island.
“It is emotional for me to come home. I value the people who helped me along the way. It allowed me to continue to get to the next level of hockey,” said Cooper.
The tournament raised approximately $90,000 for the solarium project at the Susan Andersen Library.

FOR MORE PHOTOS FROM THE TROY LONEY CHARITY GOLF TOURNAMENT AND BANQUET, SEE PHOTO GALLERY AT BOTTOM OF WEB PAGE 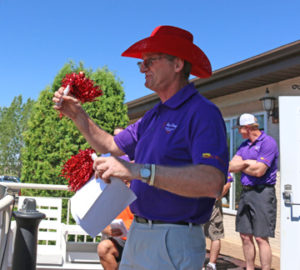 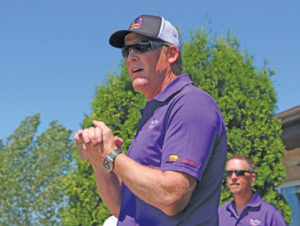 Photo By Jamie Rieger- Troy Loney gives words of encouragement prior to the start of the charity golf tournament. 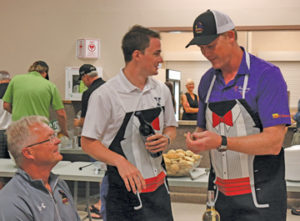 Photo by Jamie Rieger- Carson Cooper and Troy Loney serve up some wine at one of the VIP tables at the banquet.