CCi Wireless rep. Graham Fleet informed council his company would not really be interested in setting up tower service in Jenner, Bowell and Elkwater. 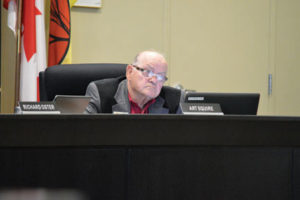 Cypress County councillors found out how difficult it will be to establish internet service in currently under-serviced areas around Jenner, Bowell and Elkwater at last Tuesday’s council meeting. Graham Fleet, director of sales and marketing for CCi Wireless, brought council information about the conditions which would have to be met in order for his company to go ahead and establish tower services in those areas.

Council has budgeted to build the towers themselves at an estimated cost of about $700,000, but had anticipated once those towers were built that CCi, or another internet provider, would be willing to come in to set up and manage the necessary coverage. Fleet was quick to throw cold water on that idea during his presentation.

“As far as the business case for these towers, basically none of those areas fit what we would consider a reasonable business case criteria on our end,” he said. “The biggest cost for us is the ongoing operation of the tower on a monthly basis. Power, lease, taxes, backhaul, break or fix on the tower; there are a number of costs. We need to reach approximately 75 subs (subscriptions) on each tower before we would consider a tower being a good, contributing tower for us (financially).”

If it achieves that ideal number of 75 subscriptions, CCi Wireless would share 10 per cent of revenue brought in for that tower with the county, and it would pay $1,500 per year for colocation (essentially rent for its use of the county-owned towers) and continue to expect the county to pay 100 per cent of its operating costs.

If it got to over 80 subscriptions on a tower, CCi Wireless would absorb all costs, pay the county 15 per cent of revenue generated and expect the county to sell it the tower the county had built.

Coun. LeRay Pahl was astonished CCi Wireless would still be hesitant to provide service at Bowell, Jenner and Elkwater if the county was footing the bill for tower construction.

“I’ve got a powerline running right past that, and I will give you the land, if you want to put a tower up for the Bowell. We are paying for the tower and you put the apparatus on the tower so… You build it the people will come.”

“That’s true to a certain extent,” responded Fleet. “But it doesn’t fly in terms of trying to build the initial business case. Certainly there are some big benefits to being first to the area, and if you are first in these areas you are probably going to be ensuring you are going to be the only one there. But, that said, there are a number of things besides that which factor in.”

Coun. Art Squire said CCi’s problems with getting subscribers in areas like Schuler and Orion, (both lagging at about 38 subscribers since the towers there were built), or Jenner and Bowell, (should they be built), might be due to CCi’s service, rather than a lack of willingness on the part of local residents to sign up.

“When are you going to expand your LTE network? Right now I can’t get service in Schuler as good as I can get off my cell phone. That is half the reason you don’t have people signing up there, because you can get better service elsewhere. Two gigabytes is no good for nothin’,” said Squire.

“As far as Schuler goes,” responded Fleet, “we’re not showing congestion on that tower right now so if you are seeing slow speeds we should definitely get our technical support guys talking to you. Over the next three-four years we are basically going to have to convert all the towers just because we are at end of life technology… To give you a date (for an LTE at Schuler’s tower)… Right now I can tell you it is not on our priority list in terms of the next 20 that will be going out.”

The bottom line, said Fleet, is CCi Wireless is not really interested in setting up service in Bowell, Jenner and Elkwater unless the county is willing to absorb most of their risks; building towers would not be enough of an incentive to get them into under-serviced areas of Cypress County in terms of internet connectivity.

“Based on the uptake we have seen in the past, it would not be necessarily something we would role the dice on right away with our own money,” explained Fleet. “At the end of the day, we have looked to set up a framework where initial risks would be shared between CCi and the county. If there happens to be a run away success story, I don’t believe the county wants to be in the operational end of things. There would be an exit plan and a buy-back of those particular towers.”