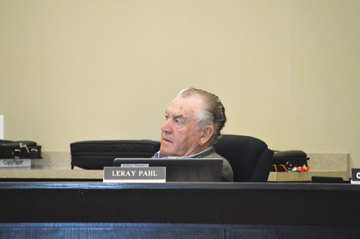 By Tim Kalinowski
On the morning of August 2 at 8:30 am, an RCMP police vehicle was involved in a collision on Highway 3 in Cypress County. The police vehicle was driving eastbound, passing Township 120. A courier truck turning on to Highway 3 from Township 120 drove in front of the police vehicle, resulting in a collision. The lone occupant of the truck was not injured.
A police officer from the Bow Island RCMP Detachment sustained minor injuries and was transported the Medicine Hat Hospital where he was treated and released a short time later.
Traffic was temporarily re-routed on Township 120 for a few hours, while Highway 3 remained open but restricted. A collision analyst from RCMP Traffic After concluding their investigation, the Redcliff RCMP have laid one charge against the driver of the courier truck of making an unsafe left turn.
S-Sgt. Sean Maxwell of the Redcliff RCMP said last Wednesday no criminal charges would be filed and the injured officer was expected to be back at work shortly.
“This whole thing could have been a lot worse,” concluded a relieved Maxwell as the Redcliff RCMP closed the book on the incident.
The RCMP have not confirmed the name of the injured officer.