Canada should be wary of undertaking new peacekeeping mission; Fardy 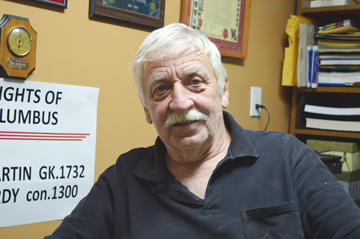 By Tim Kalinowski
With Canada considering putting a toe back in the water to enter into a U.N. Peacekeeping mission in Africa next year, there are a lot of things to think about. For example, the Cold War Peacekeeping model of sending in lightly armed Canadian soldiers to stand between national armies no longer working in a world as violent, decentralized and ugly as this one has become.
Bill Fardy, a member of the Redcliff Legion and former Chief Warrant Officer in the Canadian military, spent one dangerous, cold winter in the Golan Heights during the aftermath of the Arab-Israeli War in 1974-75. He went in under the banner of a U.N. Peacekeeping mission to keep both sides from touching off the conflict again. Fardy does not regret his service, but says he would never support such a mission in today’s uncertain world.
“A U.N. Peacekeeping operation is a policing operation,” says Fardy. “It is a job for police. As soldiers, yeah, we are trained to do this type of thing: Keep the peace, get in the middle of a fight. But when you are standing between two previously warring factions whose main desire is to cut each others’ throats, there is no place for Canadian soldiers in that kind of situation.”
Fardy acknowledges the national pride Canadians once had in their blue bereted Peacekeepers. The Canadian military also once supplied ten per cent of the force for every such mission, regardless of the situation. Where Fardy was in the Golan Heights the Canadians were near the front lines, but served in a support capacity only.
“You know where my rifle spent most of its time?” asks Fardy. “Locked up in my tent. I just looked at carrying a rifle as a provocation more than anything else. That wasn’t our job. You had to be careful. They give you maybe ten rounds of ammunition, and you go in there to try to break it up. Guess what’s going to happen to you? Our Canadian role was strictly logistics: They were cooks, drivers, mechanics, signal men, medics, that type of thing. We weren’t equipped to get in a fight with anyone.”
Fardy himself worked as a mechanic working his way back and forth across the neutral zone between the Israelis and Syrians on a regular basis.
“Nearby was the village of Quneitra,” remembers Fardy. “Quneitra was raised to the ground. Every building within a certain distance of the demarcation line was raised to the ground. You had a field of view, and if you were on either side you didn’t get off the highway because it was all mined. I travelled three or four times a day across this border. I was a mechanic. My job was to maintain power generators for the Canadian camp (Camp Quebec). I also did vehicle recovery when they broke down on either side of the border… “Across on the Syrian side there was Mount Hermon, they call it the Old Man of the East, because it is snow-capped year-round. Up on top of Mount Hermon was the Austrians, and they were the observers. They had the ten bullets,” says Fardy with a bitter laugh.
Fardy says he and other Canadians on the ground could never afford to get complacent, despite their perceived neutrality in the region.
“Some Austrians living up on Mount Hermon, they would come down to the town at the foot of the mountain. They would come down the mountain, and the road, and they would keep cutting the corner a little bit further each time. They got complacent. One day they come down and cut the corner and inch or so too much and hit an anti-tank mine. There were three of them in the land rover and they were all killed.”
Fardy says he has a certain amount of pride in his Peacekeeping past, but such pride does not blind him to the failings underpinning the U.N. Peacekeeping model as a whole.
“I think the rules of engagement have to be more robust. And they need proper back-up and equipment. It’s a different world now. You can’t do peacekeeping like you did 40 years ago. Back then it was the Cold War, and even the bad guys wore uniforms. But now, you don’t know who’s who. For a peacekeeping mission there needs to be a peace to be made. Terrorists aren’t interested in peace.”