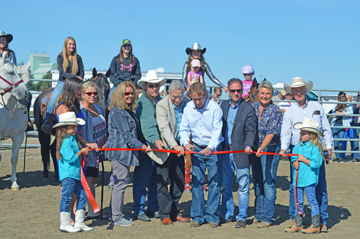 By Tim Kalinowski- After years of hard work, the Dunmore Equestrian Society celebrated the opening of the riding academy's arena with a special ribbon-cutting ceremony on Saturday morning.

By Tim Kalinowski
The Dunmore Riding Academy held a very special ribbon cutting ceremony on Saturday morning to formally open the academy’s riding arena in Cypress County. About 300 people, most from the local ranching community, came out for the pancake breakfast and were excited to be on hand for the ribbon cutting ceremony. In a rare showing of bipartisan support both Medicine Hat NDP MLA Bob Wanner and Cypress-Medicine Hat Wildrose MLA Drew Barnes both spoke in favour of the project at the ceremony.
MLA Barnes, who represents Dunmore in the Alberta Legislature, commended the organizers, Cypress County, and the local ranching and business community for getting behind the new facility. The Dunmore Riding Academy will be the largest of its kind in southern Alberta when fully completed.
“There has been such hard work to get this great idea, this much-needed facility, to this (ribbon cutting)… I don’t think anywhere in Alberta do things get done by local communities like they get done here in southeastern Alberta,” said Barnes.
MLA Wanner said these kinds of construction and community building projects were absolutely essential for Alberta’s eventual emergence from its current economic challenges.
“I think these kinds of projects need to be developed as soon as possible. Because, you know what folks? They create a living example of the challenges facing all of us in this province… This project is not only about children learning about their (western) culture and their history, it’s also about economic development.”
Deputy Reeve Garry Lentz spoke on behalf of Cypress County, which approved the development in Dunmore and forgave its taxes so the riding academy could get started on the right foot. He credited the academy’s organizers for making a great case as to why this project was important, and why it should be built.
“When this first came to council, it was pretty obvious they had done their homework, they had researched the program and they were determined they were going to make this happen. As a council we were very pleased to do what we could to participate and get this going,” said Lentz.
LeRay Pahl, president of the Medicine Hat Exhibition and Stampede, felt the riding academy celebrated everything that is best about local ranching culture and history.
“This is just an awesome facility,” said Pahl. “It gets the community together. And once this gets up and running it’s going to be a fabulous area for young kids, older kids, grandmas, grandpas—there is just going to be something for everybody. It will be a great asset to Dunmore and Cypress County, the City of Medicine Hat, and the whole surrounding area.”