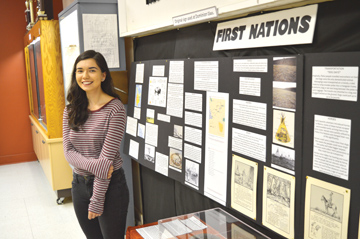 By Tim Kalinowski
The Redcliff Museum recently added a new First Nations exhibit to its permanent collection.
The display delves into the early history of the era and talks about how important that history was to the foundation of the community.
Summer student Ooleepeeka Eegeesiak, who will be entering Lethbridge University’s Native American Studies program this fall, researched and put together the display. She explains why she felt such an initiative was important.
“I hope people have a sense that history is all around them,” says Eegeesiak. “The history of the town is extremely important, and I think the people that learned how to survive in the prairie area that knowledge is important too.
“That means the ranching history, the industrial history and the First Nations history, it just all connects together… It’s our collective history, and I think it was a missing thing here at the museum.
Eegeeesiak feels their is a tendency for local museums not to dwell on their First Nations’ past as much as they probably should.
“We had the history of the town, but before the town was here there was also people here. We need to recognize that,” she says.
Museum manager Keri-Anne Lawton agrees the new exhibit gives an important context to the early foundations of the town.
“I think people forget the First Nations are a put of out town’s history. They think it happened elsewhere because we have seen such industrial progress.
“To know that history wasn’t just something happening elsewhere, to know that it is a local thing, like we see with the Redcliff Petroglyphs; we felt it was just something that needed to be highlighted.”
“The First Nations history here goes back at least 11,000 years,” says Eegeesiak. “This town celebrated its centennial in 2012. We can’t even fathom 11,000 years of history… I think it is a disservice not to recognize the things that had to happen in order for this town to become what it is now.
“The history of the First Nations people in this area was that, basically.”
The Redcliff Museum’s regular summer hours will be coming to an end on September 3, but the museum is always open by appointment coming into the fall or winter. For more information call 403-548-6260. 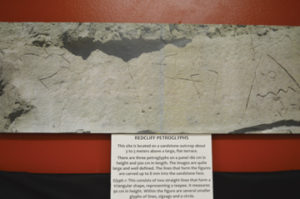 Photo by Tim Kalinowski- Detail from the Redcliff petroglyphs 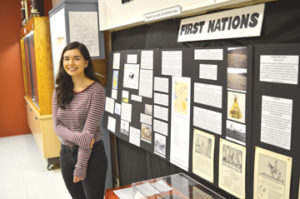