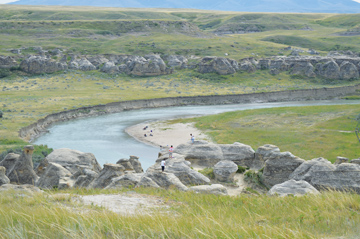 By Tim Kalinowski
Driving south on Highway 4 from Lethbridge, there is a scattering of farms and a long, empty highway. A few more kilometres and it won’t be long until you hit the Coutts border crossing. This is the last frontier of Canada; a strange, sparsely populated region consisting of farms, open prairie and few widely dispersed townships.
The highway sign for distance to Milk River passes by the outside window; here and gone, and hardly noticed. Then you look ahead.
A grand vision looms in the hazy distance. You blink your eyes. A mountain out in the middle of the prairie? Can’t be. Logic rails against what your senses are seeing, but in the end must surrender to the inevitable conclusion. Yes, a mountain on the middle of the prairie. Several in fact. The Sweetgrass Hills of Montana.
You turn east down a crunchy old road skirting the edge of Milk River. The farther you travel, the bigger those hills loom before you. Every time you think you are getting closer, like a mirage they fade away into further distance.
You are looking for a sign. Not a sign from God, but rather a sign which indicates where the heck you actually are. The GPS seems confident your destination is this way, but your eyes are not so sure. And then you see it: “Writing-on-Stone Provincial Park 9 km.” You turn south once more toward the Sweetgrass Hills.
You see the Milk River before anything else, and something which looks like gray, rocky contusions along the shore. You pull up to the Visitor Centre and look down on an ancient vista, a sacred landscape with a First Nations history going back hundreds if not thousands of years. The gray contusions? Gray in this light, anyway. The hoodoos filling up the river valley on both sides below.
In the distance, children can be seen climbing among the rocks and a little further beyond people wading in the water down by the beach.
In the Visitor Centre the displays tell the story of the interesting natural history of the area with shed rattlesnake skins and interactive computer programs informing visitors of the diversity of wildlife in the park. On this warm, August, Saturday afternoon there are plenty of daytrippers about, and the campsites down in the valley are completely full for the weekend. What draws so many to this barren, bleak and beautiful place? With its stark vistas and lazy, tea-coloured river running by?
There’s a feeling here that’s hard to quantify; and yet something tugs at the imagination, plants its seed in the heart. Afterall today’s tourists are not the first to arrive; people have been drawn here since before recorded time.
Jumping on the park’s tour bus, we pilgrims to this land of strange wonders head out into what is mysteriously called: “The Forbidden Zone.” We are going out to see something that nowadays can be seen no other way— the ancient First Nations carved rock art that gives Writing-on-Stone its name.
In a deep gorged valley surrounded on all sides by bright orange sandstone shining in the afternoon sun, our guide takes us up a stair and asks us to look at the cliff above as the early Blackfoot people did. They came seeking guidance from the ancestors, knowledge of past events and ceremonial inspiration. These symbols they carved on the wall come from a place of spiritual fervour; a desire to write the People’s history for the Creator in something as paradoxically hard and as soft as sandstone.
Looking up each finds a symbol which speaks to them. The symbols are cleverly rendered and integrated into the hillside in such a way that different turns of light in the day reveal new things to the observer.
You might see the image of a turtle, or a horse, a bison or a teepee or a shield. In the ancient days, these were clues for the spiritual seeker to follow. In more recent times, as another cliff right beside these sacred symbols reveals, early pioneers and visitors carved names and dates into the rocks to let future generations know they were here.
The motivations in these two instances come from different places, but they both mark time in their unique ways. Beneath it all a desire to carve a message to future generations in a timeless, ancient landscape. An ancient, timeless landscape where even the wind seems to whisper: “We are all travellers passing through life and out of memory. But once, long ago, we visited here.” 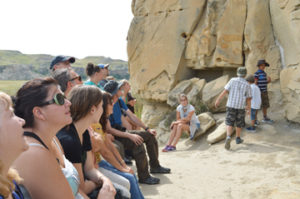 Photo by Tim Kalinowski- Visitors sit and admire the First Nations petroglyphs in the “Forbidden Zone”. 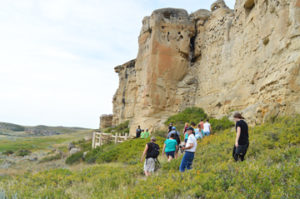 Photo by Tim Kalinowski- Visitors flock to Writing-on-Stone to see its dramatic landscape and carved petroglyphs. 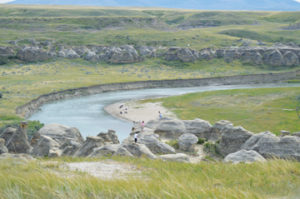