New Schuler School on schedule to open in March 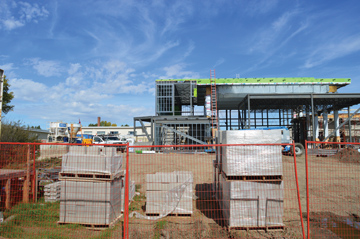 Photo by Tim Kalonowski- The new Schuler School is right on track, according to local officials and should be ready for classes in March, 2017.

By Tim Kalinowski
The new Schuler School is right on track to open in March as projected, and the superstructure of the building is beginning to take shape as construction crews were laying in concrete cinders for the east wall this week.
Schuler School principal Jason Duchscherer said watching the new structure go up day after day has been an amazing experience, and excitement is beginning to build among staff and students.
“We’re extremely excited with how things are going,” said Duchscherer last Thursday. “They seem to be on schedule. The contractors have been great; very personable and very informative. It looks like a wonderful building.”
Moving in by March should pose some interesting challenges for staff, but, for the time being, Duchscherer said they are more focused on the current curriculum rather than the eventual move.
“It’s been an excellent start to the school year. Start up has been very smooth and all routines are set and in place. And everyone seems to be enjoying the year.”
Cypress County councillor Art Squire, who represents Schuler in local government, said hamlet residents were getting eager to see the project completed.
“I think there is some excitement,” stated Squire. “I know we have a new couple in town that moved in over the summer.  With the school being there, I think the hamlet is going to stay its current size if not grow. The attraction is there for people who don’t want to have their kids going to school in the city,.”
According to Squire, everyone in the community understands what the new school building has the potential to do for the long term well-being of the hamlet.
“You want young families, and that’s basically what you are going to see with that new school being built.”
Squire went on to say the new school might also help revitalize the community in other ways.
“I think it is going to be positive for the community and we’ll get a few more people back in town,” he said. “We might even see a convenience store again. Who knows? It depends on how many people move in.”