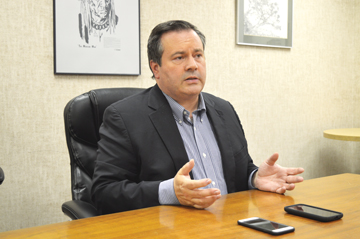 By Tim Kalinowski
High profile Progressive Conservative leadership candidate Jason Kenney was in Medicine Hat last Tuesday to speak about creating a united alternative on the right in Alberta to take on Premier Notley’s government in the next provincial election.
“I think the Wildrose could win the next election,” he admitted. “I also think there is a plausible scenario where the PCs could win the next election. But here’s my concern, as long as we are fighting each other, competing with each other, for the same scarce resources, the NDP could win the next election too. That is price none of us should be prepared to pay. We should put Alberta first and the interests of this economy ahead of any party brands, labels or legacies.”
Kenney acknowledged that some in Wildrose Party or the PC Party would never come to look favourably on a such merger, but felt those individuals represented only a minority of members.
“I respect Brian Jean. I think he has been a strong leader of the opposition. He filled the breach in extraordinarily difficult times for him both politically and personally. I respect the Wildrose caucus. I think they are doing a good job of keeping the NDP to account… I am not here to defend the recent record of the PC government. I think there is a great legacy there with Peter Lougheed, with building of modern Alberta and standing up for our resources. Ralph Klein, the Alberta Advantage and the Klein revolution. But in recent years things went off track. The party lost track of those past values and traditions; I am not here to defend that. I am here to say let’s move on and have a fresh start.”
Kenney went on to say he did not necessarily think he was the only person who could lead a united right alternative party in Alberta.
“Ultimately I want to create an new party in partnership with the Wildrose and PCs that receives the endorsement of grassroots members. And then let them decide who is the best person to lead it. I am not saying I am the best person to lead the Conservative movement into the next election. But what I am trying to do now is get the ball rolling (on unity).”
Kenney also acknowledged that Notley government has brought a new style of government to Alberta. He felt there were a few lessons to be learned there as well.
“I will give the NDP some credit. I think there economic policies are catastrophic, but I also think Albertans had a sense that change was necessary, and some of the things the NDP is doing is bringing more transparency to government. And that is a good thing.”
He said the NDP’s new and positive tone with municipalities since coming into power was also something to be taken into account, but felt this should not blind voters to the NDP’s much bigger downside policy-wise.
“I think southeastern Alberta reeves might have a better relationship with Department of Municipal Affairs,” acknowledged Kenney, “but the economy is going to hell. That is what people are going to be concerned about in the next election.”
Kenney said his message was a simple one most Conservatives in Alberta naturally understood.
“Both parties (the PC and Wildrose) have their strengths and advantages, and both have their limitations and weaknesses. So I am simply saying this: Why risk it? Why risk a second NDP term because of vote splitting? What I am proposing is the creation of a new party built on common sense, free enterprise principles.”