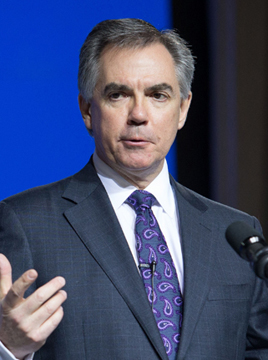 FILE PHOTO- Former Alberta premier, Jim Prentice, who died in a plane crash near Kelowna last Thursday, is being remembered for his hard work and dedication, particular with land, environment, energy and First Nations issues.

By Jamie Rieger
As Albertans mourn the loss of former premier Jim Prentice who was killed in a plane crash near Kelowna last Thursday, investigators are working at caused the Cessna to crash minutes after take-off with no emergency calls being made.
Also, the fact that the small-engine plane did not require a black box will make determining the cause of the crash even more challenging.
“In this case, there was no communication, there’s no black box to rely on and the aircraft disintegrated almost completely,” Jurek Sasiadek, a professor of aerospace engineering at Carlton University in Ottawa, told the Canadian Press. “So it will take a long time to figure it out, I guess, what happened if it’s ever possible.”
Although Transport Canada made a recommendation to require recording equipment on lightweight aircraft, pilot’s will do so at their own discretion.
Prentice remembered as hard-working, dedicated public servant
County of Forty Mile reeve, Bryne Lengyel said he had met Prentice on more than one occasion and respected his political experience.
“This is a huge shock and my heart-felt sympathy goes out to his family and friends,” said Lengyel. “This is very unfortunate and he will be sadly missed.”
Cypress-Medicine Hat MLA Drew Barnes served with Prentice in Edmonton for approximately one year and said he was a “capable, hard-working public servant”.
“First of all, I send my sympathies to his family, colleagues, and friends. This is such a tragic loss.”
Speaker of the House Wanner also released a statement on behalf of the Members of the Legislative Assembly of Alberta.
“Mr. Prentice was a dedicated Albertan who carried himself with dignity throughout his extensive and distinguished public service career. His tragic passing brings great sadness to Albertans and to those with whom he served,” said Wanner. “I’d also like to express deep sadness for all lives lost in this tragedy and my sincere sympathy to their loved ones.”
Statement from Prentice family
Statement from the family of the Hon. Jim Prentice
“Words cannot begin to express our profound shock and heartbreak at the news that our beloved husband, father and grandfather, Jim, has died in this tragic event.
In addition, another member of our family was also on the plane, Ken Gellatly, the father-in-law of one of our daughters, also a very special man.
To lose two family members at once is unbelievably painful and we are certain you will appreciate and respect our wishes for privacy at this time and the coming weeks.
We are also thinking of the other families who have been affected by this tragedy and our thoughts and prayers are with them.
In the time Jim has been with us, he was a friend to many. Jim was a loving and compassionate man who dedicated his life to his family and public service. He will be so greatly missed.
We are certainly appreciative of your condolences and prayers at this terrible time.”