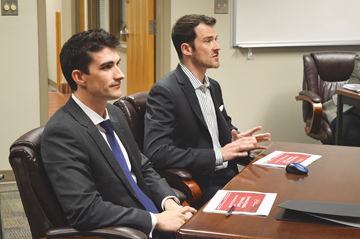 By Tim Kalinowski
Redcliff’s reserve capital investments have seen healthy growth this year, despite the province’s economic woes, Todd Poland and James Hobson of CIBC Wood Gundy told Redcliff Town Council last week. Since January 2016 Redcliff’s investments with the firm have made just over a five per cent rate of return, exceeding the average of 3.5% predicted.
Redcliff got into the market at the right time, said Poland; early in the year when market conditions were at rock bottom but expected to rise.
“Your timing was impeccable,” he confirmed to councillors. “Your rate of return is really good for the first year… We put all your money to work at the bottom of the market in February when Canada was about the worst, most unattractive place to invest globally. Our bonds were trading under value. Our stocks were trading under value. We put all your money to work at that point, and the bonds have all come back where they should have been.”
Hobson added that he expected 2017’s rate of return to also be good as the Alberta economy continues to improve.
“We’ve been through the rough, and there is a silver lining,” stated Hobson. “We think the worst has already come. We expect the oil market to rebound and essentially reach balance by the middle of next year.”
It’s not all silver lining though, warned Hobson, as the economy will rise slowly and, likely, unevenly.
“We are facing record low interest rates. We don’t have $100 oil anymore. There is lots of uncertainty in government both at the provincial and federal level. We have seen record high volatility driven by high frequency trading and (negative coverage) in the media. So what are we seeing? Higher costs, lower revenues and lower investment turnout going forward… We think we are going to be in this environment for the foreseeable future. Interest rates are going to stay low.”
Poland said that’s why his company prides itself on keeping communities like Redcliff’s money in safer, guaranteed or more liquid investments where they can be withdrawn at any time without penalty. By taking advantage of the collective buying power of all its municipal investors, said Poland, they were able to get the best out of the marketplace, even with a stale investment climate slowing growth globally.
“You are in good hands,” Poland assured council members. “We run over $1.5 billion in the province, most of which is municipal money… We hold your money to a higher degree of security than the Municipal Government Act allows you to have.”