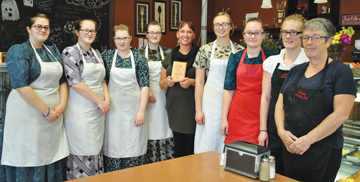 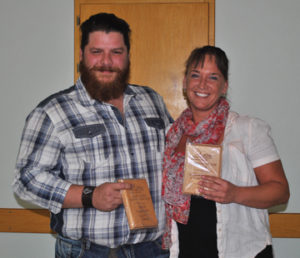 Photo by Jamie Rieger- Jeremy Mitchell, owner of Unity Electric, proudly displays the plaque he and his home-based business earned at the recent Small Business Awards night in Bow Island. Mitchell is pictured with Erna Varekamp, whose Erna’s Rolling Pin Bakery and Cafe won Small Business of the Year.

By Jamie Rieger
The business recognized as the Small Business of the Year is one that is voted on by members of the public for its outstanding service in the community. Recently, ballot boxes were placed in local businesses for people to vote on this year’s nominees and the winners of the various awards were presented with plaques at the Small Business awards night, hosted by the Bow Island/Burdett and District Chamber of Commerce.
This year’s recipient of the Small Business of the Year is Erna’s Rolling Pin Bakery and Cafe, which is noted for its homestyle meals and baked goods.
“I couldn’t believe it when we won. I am happy and proud and also proud of my staff,” said Erna Varekamp, owner. “I hope we provide a good service for everybody. You get what you pay for and it’s better than going to the city. You see so many restaurants make soups out of packages. Everything we make here is from scratch.”
The Rolling Pin also has many regular customers who travel from Medicine Hat, Lethbridge, and Redcliff.
Besides serving made-from-scratch meals to their patrons, the Rolling Pin also caters a lot of local events.
“I am very blessed with the staff I have. Most have been with me since I started,” said Varekamp, who purchased the Rolling Pin Bakery and Cafe in July, 2014 and has operated Erna’s Berry Farm since 2008.
Other small businesses were recognized for achievements in different categories. They include:
Small business award winners include:
Long Service award- Wayne Gilbertson Sales and Service
Agri Business award- Laidlaw Ranching/Sand and Gravel
Home-based Business award- Unity Electric
Most Innovative Business award- Lux Hair Studio
Spirit of Bow Island award- Bow Island Hardware