CAV members stand proudly beside other vets on Remembrance Day 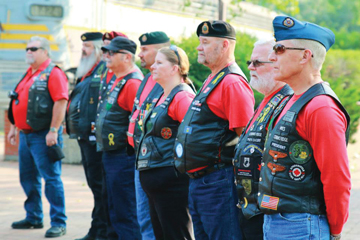 By Tim Kalinowski
When people think of Canadian veterans they typically think of the older Second World War and Korean War vets who dress up in Legion uniforms on Remembrance Day, but there are other veterans’ groups in Canada that do things a bit differently.
The Canadian Army Veterans Motorcycle Club is one such organization. Instead of blue suits, striped ties and Legion berets, the veterans who make up the “CAV,” as it is affectionately known to its members, tend to be motley group of guys and gals. The things which unite CAV members are their shared history of military service and their love of freedom, expressed in this case by their love of motorcycles and the open road.
Maj. Wes Richmond (ret.) is the president of the Medicine Hat 3rd CAV Coriano Ridge Unit. He explains further.
“I don’t think I joined as much to mark my service, but it was something which was attractive to me because it was veterans, other guys like myself, that had formed this new motorcycle group in 2007,” says Richmond.
“We don’t hold ceremonies. We don’t stand on ceremony at all. We are very informal in that regard; although we do have a fairly structured organization.
“For our members it has to be an even playing field. If it’s anything other than that, you wouldn’t have an organization. People in the group got out of the military, mostly, to leave all that (protocol stuff) behind them.”
W/O Al Murray (ret.) of Suffield is a former president of the 3rd CAV, but has gone on to become a Road Captain with CAV’s national organization. Murray served on various peacekeeping missions and acted as an ammo tech in Afghan War from 2009-2010.
Murray says when he got out of the military, he was looking for some place to hang out with other veterans. The thought of joining a more traditional veterans organization, however, did not appeal to him.
“We all retired from the military for the same reason; it was time,” says Murray. “There is no ‘Yes, sir. No, sir. Three bags full, sir.’ The CAV is very much informal.”
Richmond says the one nod his CAV members make to their former military service is on ceremonial occasions when they all put on their red, collared shirts, black jeans and black vests. Members also wear a beret or cap of their own choosing from whichever unit they served with while in the military. It does stand in as a uniform of sorts, admits Richmond, but being well-turned out is sometimes necessary.
“If there is an escort required down the highway quite often we’ll do that. We did that for Sapper Stephen Stock (Medicine Hat vet killed in Afghanistan 2008), and when the Portraits of Honour truck and trailer came through the area. We did that for the Gordon family when their uncle was repatriated to Canada after his body was discovered buried in France with German WW2 soldiers a few years ago… Those people were killed in war fighting for what they believed in. It really is an honour for us to be given the honour of escorting them.”
CAV members also attend Remembrance Day ceremonies and lay wreathes in Medicine Hat and Ralston every year. Richmond says Remembrance Day is important to every veteran, no matter which generation they might be from.
“We have to remember the sacrifices of all those people who went over. Some of them didn’t come back, obviously. And those are the ones we are really trying to remember so we don’t forget the sacrifices they have made.
“People today take a lot of things for granted in their lives. And don’t really appreciate the sacrifices which were made so they can live the good life they’ve got in Canada today.”
Murray concurs wholeheartedly.
“We do take it for granted what we have in Canada today,” he says. “I’ve seen kids literally in rags (in Afghanistan) and you throw them a pack of Lifesavers and it’s like you have given them the keys to the mint. They don’t have televisions, Xboxes or access to Walmart, and all these other things. They literally go day to day with what they’ve got and what they can get.
“Remembrance Day is important to the CAV,” continues Murray. “With the CAV, as veterans, Remembrance Day gives you that sense of belonging again you had when you were in. To be able to be part of a motorcycle unit; it brings that camaraderie. You still belong. You ask any vet, and that’s what they miss after they retire.”