Paying respect to our fallen soldiers 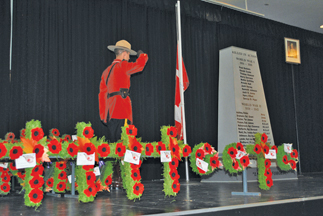 Learning to love each other first is vital for peace was the important message Pastor Mac de Waal sent out to those in attendance at the Remembrance Day service at the Foremost Community Hall on Nov. 11.

“If we learn to put each other first as Christ taught us, there would be no reason for war,” said de Waal. “We have to love each other, but where does it start? It starts in the hearts of each individual. It has to start right now in our individual hearts.”

Several dozen people attended the service to pay their respects, lay wreaths and honour Canada’s fallen soldiers. The ceremony was led by Sgt. at Arms Gary Hobbs who gave brief opening comments before the marching of the colour guard and singing of O’ Canada.

In speaking to the audience, de Waal said that there are currently there are 55 different wars taking place around the world, some dating back to the 1970s.

“Four of them have had death tolls of 10,000 or more,” he said. “The world is still at war, but this is not the world that those who died intended for us.”

Dozens of wreaths were laid at the front of the room; some in honour of deceased family members, others on behalf of businesses and organizations.

Bugler John Prins played the Last Post, prior to the two minutes of silence. The service ended with the singing of “God Save the Queen” and the marching out of the Colours. 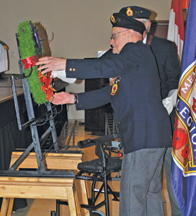 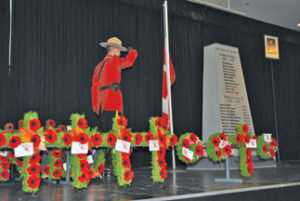