A life worth living: Elizabeth Mack takes on society’s notions about chronic pain and suffering 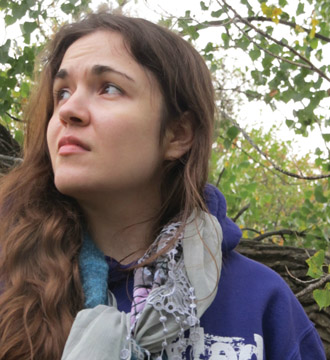 Submitted photo - Elizabeth Mack has been living with chronic illness since she was a little girl, and it has only gotten worse in recent years. However, Mack says she has learned a lot through her experiences and would not have traded her life to date for anything.

By Tim Kalinowski
Chronic suffering does not mean a person cannot have a valuable and rewarding existence, says 26 year-old Elizabeth Mack of Redcliff.
“With any kind of pain, I don’t think we as a society have the proper view of it,” she says. “It’s something we try to avoid at all costs. We want convenience and comfort… I think in other cultures they perceive it differently. From what I have gone through, pain is something that is very difficult to live through, but it also brings out some very beautiful things we don’t see until we have stuck it out. They are blessings, and you can have a life which is incredibly valuable and beautiful.”
Mack, who suffers from five chronic, tick-borne conditions, including Lyme disease, babesia and bartonella, has been experiencing the symptoms of her illnesses since she was a child. But it wasn’t until she reached her twenties these underlying conditions began to severely undermine her overall health and create episodes of chronic pain and suffering. She has been on intensive treatment for Lyme disease for the past three years, and will likely have to take medication to control it for the rest of her life. So she knows what she speaks of when she speaks of chronic pain and discomfort.
“Sometimes it’s the really simple things that we take for granted normally,” she explains. “As a person, when you are in pain, when you are given comfort it means ten times more than it would if you have a normal life. If you are too busy to notice the little things like sitting outside in the sunshine, it suddenly takes on a whole different meaning when you can’t get out of bed some days. Or, being able to go for a walk is fifty times more precious when you can’t do it on your own, and it seldom happens. Being able to have fresh air you can breathe, and being able to breathe, is such an incredible blessing that really sucks when it’s not there.”
She says her conditions have also helped her to appreciate others more as well.
“I think there is a lot of hope people can have even when they are in pain. It teaches us kindness, and it gives us a chance to focus on what life is about, and which things are the most important.”
The reason Mack decided to go public with her experiences is because she wants to get out a message to those in society who are now advocating so forcefully for doctor-assisted suicide.
“It really hurts me on a really deep level (to hear people advocating for it),” she says. “And I am afraid for people like myself who are very ill, and who are vulnerable. And I guess, really, for people in all sectors of society. I think it’s an issue that’s going to affect them more than they realize… To me it’s a really personal issue because a lot of reasons people give me to do doctor-assisted suicide, why they think it should be allowed and it’s a good idea—about people being in pain, and it being hopeless and people being depressed and upset— I don’t think they realize all of them currently apply to my life.”
Mack admits she has known others suffering with similar chronic conditions to her own who have simply been unable to go on, and have taken their own lives.
“I do know there are a number of people with some of my diseases who have committed suicide because some of these diseases can be very difficult and never improve, and will continue to become more debilitating and severe,” she says. “I’m not going to lie. There are days when I sometimes prefer to be unconscious, and I don’t enjoy living through. But I think just hanging on and getting through them, there is always a dawn to night.”
She says it is hard enough for sufferers like herself to keep on going without so many whispering in their ears to consider doctor-assisted suicide.
“Once we start saying we should only keep people alive who can accomplish the most, that’s very dangerous ground to be on,” says Mack. “Whenever someone is in pain they are very vulnerable. To put that decision in their hands is, in my mind, not fair to them or the people who love them. We need to protect people more than that.”
Mack says she hopes her message can get out to others who are suffering, and to society as a whole.
“I am hoping to maybe start people thinking about the issue. And to may be start seeing it more from a sick person’s point of view what, in essence, we are actually saying when we promote doctor-assisted suicide. You are saying that person’s life isn’t valuable within society.”