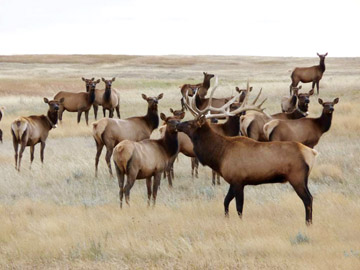 By Tim Kalinowski
CFB Suffield has decided to change the way it does this year’s elk hunt, says base commander Lt. Col. John Scott.
“I observed last year’s hunt pretty carefully… And what I say is, we do a lot of dangerous stuff in the military but that elk hunt last year was pretty crazy. We did our best to keep people safe, no one was injured thankfully, but it was really aggressive,” he notes.
Scott said the sustained pressure of last year’s hunt, doing it week after week, day after day, turned out, in the end, to be counterproductive.
“We created an environment where hunters were pushing herds,” he explains. “To the point where a large portion of animals actually crossed Hwy. 1 to the south; many of those animals not coming back. What that did was create sort of a secondary risk to the surrounding community I wasn’t prepared to endorse as a landowner this year… The other problem with hunting them continually is the elk adjusted and started moving into areas where we really couldn’t hunt them.”
This year CFB Suffield will have hunters coming in intervals, with one week of hunting followed by one week of non-hunting, all the way through to the end of January. The base has also decided to offer hunting opportunities this year in the National Wildlife Area so the elk simply don’t all run in there to take refuge when the hunters are on the ground. Scott feels hunters heading into the National Wildlife Area will enjoy the experience.
“What we have seen thus far is there are some monster elk in that area.”
However, hunting in the National Wildlife Area will have additional caveats over and above those in place for hunting in the rest of the range. Hunters must stick to the main roads, have all proper safety equipment for operating in this vast and isolated wildlife area, and they must bring a reliable GPS system along so they won’t get lost on the hunt. Also, if a hunter makes a kill off the road, he or she must prepare the creature on the spot to carry out manually; vehicles will not be allowed off the roads in order to protect the larger eco-system of the National Wildlife Area.
“This is old school hunting, so you have to be prepared for that,” says Scott. “On the other hand, some of the monsters getting pulled out of this area are worth the effort.”
While the kill numbers so far this year are about 150 less than the same time last year, Scott is hoping it will all equal out in the end.
“We have had a bit more of a sustainable take this year, and I am hoping slow and steady will win the race. Unlike the surge we had last year that sort of dropped off toward the end.”
Scott is also conscious of some of the bovine TB concerns out there, but he is happy to report ongoing government testing on every elk killed in all the hunts to date has been negative.
“Fortunately, we are already doing that chronic wasting disease testing as part of the hunt,” says Scott. “They are already testing the heads, and because of that process they already have access to the lymph nodes right on scene to look for TB. The provincial specialists have been doing this from 2012, and have never seen symptoms of this bovine tuberculosis in the elk herds.”
Last week CFIA representatives confirmed the elk on the Suffield range were not the source of the bovine TB outbreak in the region, which has caused the quarantine of 36 farms so far. The strain of TB found in tested animals is likely a Mexican strain, according to CFIA officials.