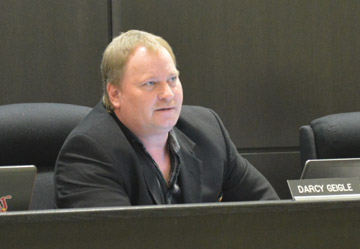 By Tim Kalinowski
Freshly back from the AAMDC conference, (where Deputy Premier Sarah Hoffman was booed by municipal leaders from across the province over her government’s environmental policies), Reeve Darcy Geigle had the Alberta government’s carbon tax squarely in his sites last week.
“Everybody feels this is just a way of sneaking in another tax on us. We are going to check into whether one government can tax another. I don’t legally think they can, but we have got to check into it and see what the ramifications are, and then we’ll have to pursue that. Because that’s just another burden on taxpayers.”
Geigle’s comments came after the Corporate Services director John Belanger told council members the carbon tax would likely cost Cypress County $20,000-$25,000 in extra heating fuel charges, and the same amount on fuel for county vehicles. Belanger said the total cost to the electricity and natural gas was still unknown, but would likely also be in the $20,000-$25,000 a year range. Tallied together the total cost of the carbon tax would likely be about $75,000 in direct taxes to the county annually, but could be twice that once indirect costs are added on.
Geigle said it was unfair, and perhaps illegal, for the provincial government to tax municipalities directly in this way; especially during a time when the provincial government is cutting back on its grant program funding.
“Everybody is always looking for more money, and grants are becoming harder to find,” said Geigle. “And now they are taking more out of your operating that can be used elsewhere. If we got to live with the carbon tax, maybe the municipalities, at least, can be exempt from it.”