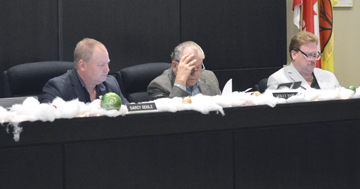 Photo by Tim Kalinowski- Pictured, from left: Reeve Darcy Geigle, Coun. LeRay Pahl, and Coun. Dan Hamilton were perplexed at last week's council meeting by the projected deficit of $1.5 million in the budget numbers for 2017.