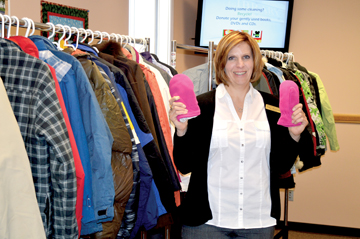 Photo by Tim Kalinowski - About 20 local families took advantage of the Coats for Kids campaign this year. Not only did they receive a warm coat, but they also got mitts, toques, and socks, thanks to Redcliff Public Library's Mitten tree, says library manager Tracy Weimar.

By Tim Kalinowski
According to Redcliff Community Services, roughly 20 families came out to free coats, socks, mittens and toques during its “Coats for Kids” campaign distribution last week.
The event had to be extended for two additional days as only four families came out on the initial planned distribution at the library on Wednesday. There was a library sponsored social media blitz and additional announcements made at local schools to get the word out to ensure any families in need had the opportunity to find out about it.
Library manager Tracy Weimar said the Redcliff Public Library was proud to host such an event to support local community members in need. The library was responsible for collecting the socks, toques and mittens handed out last week, while Community Services had collected the coats.
“Considering the way the economy is right now, there is a lot of people out there out of work,” said Weimar. “And trying to clothe your family is expensive to start with, but in the winter especially.”
The library’s community mandate has always gone far beyond the signing out and receiving of books, she said.
“Everybody knows where the library is, and we seem to be the central hub; so why not help out? We all know when winter hits— and we are just at the beginning here, it could drag on into January, February, March— it’s important to keep those kids warm as well as the adults. We have lots of adult clothing here as well.”
Weimar said the sheer number of coats, toques, mitts and socks collected this year shows the generous community spirit of Redcliff at its finest.
“It’s amazing. Whenever something like this needs to be done in the community, everybody steps up.”