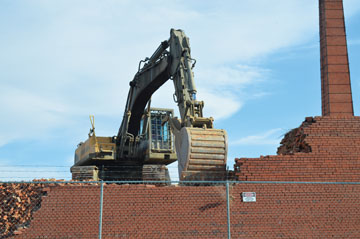 Photo by Tim Kalinowski- A piece of Redcliff's history was lost when the I-XL Pressed Brick plant was torn down in November. For many, 2016 was a year filled with numerous historical endings and sorrows; however, many hoped that out of the ashes of the old would arise the new.

Elkwater and Medicine Hat began intensive preparations to host the Alberta Winter Games. Organizers were worried about the potential for a mild winter at outdoor venues, but felt they were on track to open the games successfully.
CFB Suffield started its first big Elk Hunt in several years on January 11.
Also on January 11, the Suffield Fire Department responded to a mjor structure fire at Suffield’s Snack Shack. The building was a complete loss and the fire was immediately deemed suspicious by the Office of the Fire Commission. It would later be ruled arson.
Tributes poured in as well-known boxing coach Bill Page passed away. Page was a Box Springs resident for most of his life and taught boxing for 40 years in the area. He was a founder of the Medicine Hat Boxing Club.
The Dunmore drainage plan was a topic of intense discussion at Cypress County council on January 12, as major revisions to the plan were introduced for the first time to councillors.
Hilda area native son Dr. David Krause spoke to the Courier about his career as an internationally famed paleontologist with New York’s Stony Brook University.
The Town of Redcliff voted to support the first ever “Test for Humanity” mountain bike race on its coulee trail network at the public meeting on Jan.11.
Irvine School students officially opened their own bank branch through the The Schuler Community Association announced plans to pursue funding from Cypress County and others to build a new community hall at the SCA AGM on Jan. 18. Junior ATB program with a ribbon cutting ceremony on Jan. 15.
Musical murder mystery “Oh Horrors! Its Murder” had a great crowd on hand at Irvine School on Jan. 22.
Elkwater and Medicine Hat were in final preparations mode for the Alberta Winter Games at the end of January, but mild weather was putting the viability of some venues in doubt.
Redcliff council vigourously debated a proposal on Jan. 25 to invest $8 million in reserves to try and make more money for the town. Council members voted in favour despite Coun. Larry Leipert’s strenuous objections.