Support for local food bank is up, but so is the need 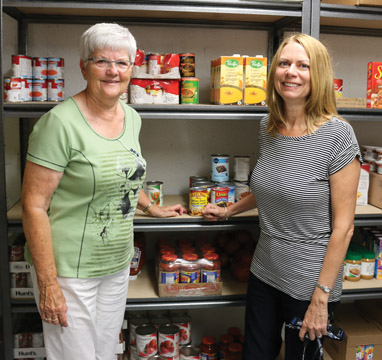 The Bow Island food bank, like most others across the province and country, saw an increase in need for their services in 2016, but fortunately donations were also up, for which they are very grateful.
“We are doing very, very well as far as contributions and we want the community to know how grateful we are,” said Lisa Braat, adding that while the donations are up, the need for food hampers has also been increasing.
The Bow Island Food Bank assisted 20 new clients/families in 2016, for a total of 45 receiving a helping hand and 129 hampers being distributed. By comparison, in their first year of operation, 1995, the local food bank gave out three hampers and seven in 1996.
2010 has been the busiest year for the food bank to date, with 155 food hampers being disbursed.
The increase across the province, however is staggering. According to statistics provided in Hunger Count 2016, a report by Food Banks Canada that looks at hunger and food bank use across the country, Alberta has seen a 136.1 percent increase in people accessing food banks between 2008 and 2016. The national average for the same period is a 27.8 percent. Saskatchewan has seen a 76.9 percent increase, Ontario 6.9 percent, and only Newfoundland/Labrador recorded a drop from 2008-2016 of 3.3 percent.
Since 2014, the need for food bank assistance in Alberta has increased by 60 percent.
Across Canada, 863,492 people accessed food banks in March, 2016. The annual Hunger Count report uses March statistics each year as it is a month where there will likely not be drastic fluctuations to alter the figures.
The report attributes the increases to short-term economic disruptions and the “long-term failure of governments to provide supports to Canadians who have fallen on hard times”.
It also includes data on rural food banks, such as the Bow Island food bank, which serves the local community, as well as residents in the County of Forty Mile and Foremost.
Information from 624 rural food banks is included in the statistics. In March, 2016, 155,756 people received food bank assistance, an increase of 2.3 percent. As well, the average age of rural food bank clients is slightly older, with 30 percent being over 45 years of age and more likely to be living on a pension.
Food Banks Canada has made several recommendations to the federal Liberal government for change over the past several years which have resulted in positive steps in the right direction, including establishing the Canada Child Benefit, investing $574 million for renovations to social housing, increasing guaranteed income support for single seniors by 10 percent, and expanding the Nutrition North Canada program.
They currently recommend that the Standing Committee on Human Resources, Social Development, and the Status of Persons with Disabilities present its report on consultations no later than May 1, 2017 and for the Minister of Employment and Social Development present to Parliament its Strategy on National Poverty Reduction no later than Oct. 1, 2017.