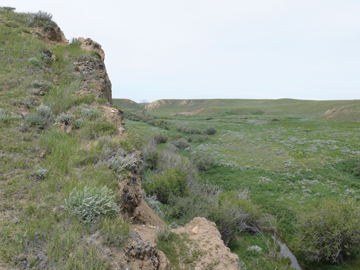 Photo courtesy of ACA- The Silver Sage Conservation site, south of Manyberries is a unique area, filled with many native plants and wildlife. The ACA is making land available for grazing.

By Jamie Rieger
The Alberta Conservation Association (ACA) will be offering seven fields in its properties south of Manyberries to for five-year grazing licenses for area cattle producers.
“This is the second time we have done this. We want to ensure equal opportunity for the producers,” said Tyler Johns, biologist for the ACA. “We want to support young farmers and we are looking at criteria like how far away is their farm, conservation initiatives, and capacity to adhere to recommended grazing strategies. It’s not about going to the highest bidder. It is a flat rate of $20-UAM.”
While conserving the land is their main goal, allowing grazing helps the natural grasses flourish.
“Now that we don’t have bison roaming our prairies, having the cattle there is a good thing. We’ve noticed that the native grass needs a little disturbance to thrive,” said Johns. “We use cattle to manage our grasslands for the wildlife habitat.”
The ACA lands are also for designed for human activity.
“When we preserve these lands, it is for the hunters, the birdwatchers, and the berry pickers,” said Johns, noting that the properties are foot access only and no overnight camping is allowed.
The ACA started purchasing the land south of Manyberries in 2010, bought the last parcel in 2015, and currently have approximately 2,300 acres secured.
“Some of it was cultivated, so over the last six years we seeded it back to native grasslands. This is great for wildlife species and for the livestock producer. The key message is that we have put 1,000 acres back into production,” said Johns, adding that reclaiming the cultivated land has been a slow process.
The study found that while one piece of land in the study is healthy and capable of sustaining grazing, the area that was reseeded from cultivated land back to natural grasses, may not be ready for grazing for a few years. As well, there may be challenges to achieving an acceptable balance in some parts of the study area may be challenging. There are approximately 60 different wildlife species in the designated areas.
According to the Silver Sage Conservation Site Range Inventory and Rare Plant Survey (conducted on 480 acres of the ACA property), that was completed in December, 2016 by Kestral Research Inc for the ACA, “Grazing management on the floodplains of Ketchum Creek could be a challenge to utilize the productive crested wheatgrass, meadow brome, and smooth brome pastures while protecting the rare peach-leaved willow community, riparian vegetation, stream and fishery from negative impacts.
It is suggested that electric fencing and off-site watering would be recommended to minimize the impacts of grazers on the tall shrub community and banks of the stream.”
A progressive summary of the reseeded area states that these pastures could be grazed ‘lightly’.
Another piece of new ACA land in the study indicated previous heavy grazing on the floodplains and upland pastures (Field H and not one of the fields included in the current five-year license application) and is described as being “healthy with problems”.
Successful applicants for the five-year licenses will be able to graze their cattle from mid-July to October, prior to the start of hunting season.
“The livestock will be off the property by the end of October, so there will be no conflict with the hunters. We’re working with the producers and the hunters here,” he said.
Fences are all in place, but any repair work the ACA will purchase the material, but the lessee will be responsible for the repair work.
“In the past, it has been a shared cost when it comes to fence mending. Now, we purchase the material and the lessee does the work,” he said.
ACA is a non-profit organization, non-government association. However, it does partner with the provincial and federal government for various programs. According to the ACA website, its largest revenue source was $12,000,276 received from taxes on hunting and fishing licenses, 95 percent of which is directly applied to the conservation of wildlife, fish, and habitats. In addition, $4.4 million was received in non-levy revenue, including lad purchases/donations, partnerships, and other, unspecified sources.
“We work in partnership with the government. We created our own entity in 1996,” said Johns.
The ACA partners with Alberta Fish and Game Association, the Government of Canada’s Habitat Stewardship program, Medicine Hat Fish and Game, Multisars, and Pheasants Forever.