RCMP puppy training is the elementary school for police dogs 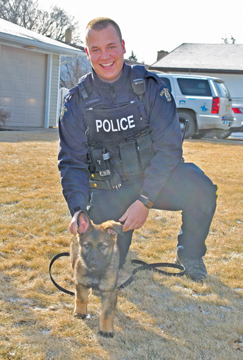 Photo by Jamie Rieger- Cst. Andrew Crouse poses with his latest trainee, Jasmine, who will train with him for the nest year-and-a-half before going onto more specialized training.

By Jamie Rieger
When a situation unfolds that require the use of a police dog, the RCMP is confident that the dogs trained through their Puppy Program will be able to do whatever is required to get the job done, whether it is sniffing out drugs or weapons or assisting at search and rescue missions. Bred at the Police Dog Service Training Centre in Innisfail, the pups start their initial training at just a few weeks old and eventually progress to more specialized training.
Cst. Andrew Crouse knew when he joined the forces that he wanted to be a dog handler; so, after being posted to the Bow Island/Foremost detachment, he reached out to the local dog handler in Lethbridge who helped him get started.
“I would go there on my days off to work with him,” said Crouse, who was soon recommended to be a handler for the RCMP Puppy Program. One of his puppies, Howie, that Crouse has been working with for the last year, just passed his test on Feb. 15 to move onto the next level of training.
In October, Crouse received Jordyn, but personality conflicts with Howie did not all this pup to stay with Crouse.
With Howie moving on, Crouse received another pup, Jasmine, who he has had since Feb. 27.
“We train them obedience, tracking, aggression, and many other things. By the time they leave training, they know everything they need to before the formal training,” said Crouse, adding that Howie will now be getting trained for bomb and drug situations, for instance.
Familiarization and socialization are big components of the initial training for the puppies.
“They are supposed to be indifferent in all situations. So, they get trained with things like elevators and public places. I take her to the schools after hours for training there, too,” he said. “The more socialization and familiarization for the pups, the better it is. They need to feel comfortable no matter what situation, wherever they need to go.”
Every four months, somebody from the program comes and tests the puppies and by the time they are  about one-and-a-half years old, they can progress to more formalized training, provided they first pass a test.
Over 1,450 puppies have been trained through the program since 1999 and Crouse said that a big part of its success is the breeding program at Innisfail.
“Originally, the RCMP would buy dogs from Europe, but since we have started our own breeding program, the success rate has significantly increased. They now have it down to a science,” he said.
The German Shepherds are chosen to be police dogs not just for their intelligence and great noses, but also because of their coat.
“German Shepherds have super thick fur so they can regulate the heat better and the cold. They are perfect for our climate,” said Crouse. “They are also very physical and can keep up with the demands of police work.”