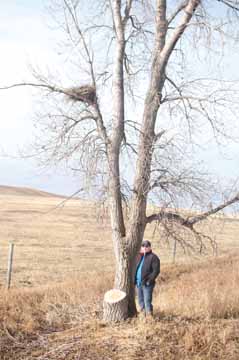 Photo by Justin Seward - Aaron Elhart stands beside the lone tree near his land near Township Road 132, a tree with a hawk's nest that Elhart saved from being cut down by county workers earlier this winter.

By Justin Seward
Cypress County Farmer Aaron Elhart grew up on  his Township Road 132 farm all his life and is proud of where he is from. However, earlier this winter when  he went down to open  up the ice for his cows, he discovered county workers cutting down trees across the road because they were becoming a potential liability to drivers. The county has very little tree growth to begin with and Elhart was displeased after the workers  put a wedge into a tree that had a hawks nest in it.
“I was very upset when they were cutting it down because of the hawks nest,” said Elhart. “Unfortunately I wish I was there 10 minutes earlier because they already hacked into the tree. I did get them to stop it but I don’t know about tree now because they cut the wedge out of it. I’m sure it’s going to rot and eventually blow over again. I guess for this year the hawk can have its nest.”
He takes great pride in the natural area because to him a hawk is a beautiful bird and one that’s useful for farmers and ranchers in cleaning up their land.
According to Elhart, there is nothing around the area for miles and for the county to come in and cut down trees that aren’t impeding is unnecessary and a waste of taxpayers money.
“These trees are spread out in the right areas to do that,” said Elhart. “If you cut them down, there’s nothing to replace them with and the history with trees in my own yard, trying to get a tree to grow, it’s a 30 year process. When you have one growing for 50 to 60 years, you just leave it alone.”
Cypress County Reeve Darcy Geigle said when the new council was elected in 2013, they were in favour of changing the tree removal policy to moving those stumps in the ditches because if there were an accident to happen, the county is liable. “We’ve changed the policy now so that those trees can be left alone at the discretion of council,” said Geigle.  He added the county is leaving those 50-year-old trees  alone if hawks are mating and if eggs are left in the nests.