Solar panels costly, but worth it in the long run 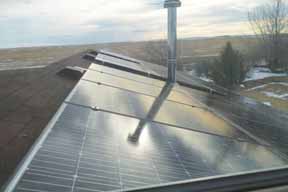 Photo submitted by Stuart Angle - Stuart Angle started thinking about installing solar panels on his home years ago, but only recently saw the project to completion.

By Jamie Rieger
It was many years prior to alternative energy becoming trendy that Stuart Angle first began researching the possibility of having solar power at his home. In fact, it was in the 1970s when he first gave it some serious consideration.
At the time, however, the cost alone was enough to dissuade him, at least for the time being.
“Now, it has become slightly more viable,” said Angle, adding that he will break even on the project, if all things remain as they are today, in about 12 years.
All things considered, Angle is saving roughly four dollars a day.
“I base it on what I will net on my January utility bill because that is the least productive month and now I have enough data to show I will break even in about 12 years.”
His 8.9 kilowatt system will fluctuate in the amount of energy it produces.
“The days are getting longer, but so far my worst day was seven kilowatt hours, a day when there was complete snow cover. My best day so far has been 55 kilowatt hours,” he said.
“Once it turns on, it feeds the house needs first, then the rest goes back onto the grid and it works back the meter.”
Angle said people looking to have solar panels installed need to do their research. Angle took bids from four different companies before making his final decision on who would install solar panels.
“People need to do their due diligence with this. There are different business models out there and whenever there is a government incentive, there will be some companies who think the consumer won’t notice if that isn’t reflected in the cost,” said Angle, adding that three of the bids were comparable in price, while one was excessively high.
While solar energy is moderately new, Angle said wind energy has been commonplace for farms in southern Alberta for decades.
“In the 1930s and 40s, windmills were used for water and electricity for the glass pack batteries. Then, everybody wanted rural electrification,” he said.
Angle noted that despite a small subsidy, he may not be any further ahead in that regard.
“What little subsidy I did get and the check is in the mail, I will have paid in carbon tax by the end of the year and it looks like there will be income tax on any subsidy. So, the government again is trying to rob my piggy bank. Between the provincial and federal government, they are robbing me of my middle class,” he said.
“This Alberta government is really disconnected from the realities in rural Alberta. They seem to seek first and understand later.”