Region gets $2.1 million for flood work 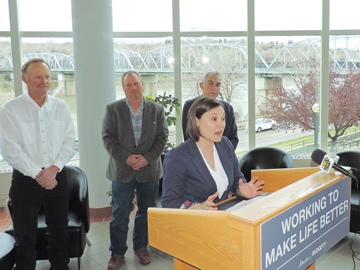 By Collin Gallant
Southern Alberta Newspapers
New provincial flood grants for the area will focus on utility operations in Medicine Hat and Cypress County, as well as watershed health in the region, according to a Monday announcement at city hall.
However, it’s not big dollars to pay for berming projects already built by the City of Medicine Hat out of its reserve funds.
Last year’s announcement of Alberta Community Resiliency Program grants repaid a portion of work completed on the Lions Park Berm. It also put more money toward a permanent flood barrier near Industrial Avenue, where work could begin soon.
On Monday, the city shared in $2.1 million in grants announced for the region by Environment Minister Shannon Phillips.
“We’re always pleased to support investments in southeast Alberta that will better manage water, and certainly during spring, people are thinking about floods,” said Phillips.
“We know there’s a lot more work to be done but we’re continuing to work away and provide stable, predictable funding.”
The province will pay $774,000 toward safeguarding the water intake system at the Medicine Hat powerplant, and pay $923,000 toward relocating a troublesome water pumping station that serves Veinerville.
Another $378,000 is dedicated to restoring portions of the Seven Persons Creek banks and further improvements to reservoirs in the Milk River basin.
Mayor Ted Clugston said the city has approved $33 million in projects following a widespread damaging flood in 2013. About $27 million has been awarded so far by other levels of government — all but $1.5 million from the province.
“We’re getting closer,” said Clugston, whose council has adopted a policy of building flood projects first proposed in 1995, then seeking funding afterward.
“We’ve talked about it and the minister has assured me that $5 million or $6 million could be available in future programs,” said Clugston.
Phillips lauded the city’s efforts but stopped short of giving a funding guarantee.
“Certainly Medicine Hat has projects in the queue and they’ve been deferred (for funding), but certainly not rejected.”
She said this year the province received $274 million in grant applications for about $35 million in available money.
The ACRP provides about $50 million per year for flood funding, though Phillips said more could be added when federal co-pay infrastructure programs become clear.
At Monday’s announcement, Cypress County Reeve Darcy Geigle said rebuilding the Veinerville station on higher ground and further east will help ensure drinking water keeps flowing during another flood.
“It’s been hit a number of times over the last 10 years,” said Geigle, adding it could also aid water co-op expansion east of the city limits when it’s built, possibly in 2018.
The current station, located near Ross Creek, suffered broken lines during floods in 2010 and 2013. Because of the location, repairs had to wait until water subsided, which left about 80 residences in Veinerville without any water service.
In Medicine Hat, the Unit 12 intake, which services both the water and power plants, remained operational during the 2013 flood but filled up with sediment, and needed to be cleared afterwards.
Utilities commissioner Cal Lenz said advanced engineering will likely be completed in the fall. Final budget estimates could be known at that time.
The Seven Persons Creek will be the subject of $221,000 in watershed resiliency and restoration grant funding. Local group SEAWA hopes to restore and strengthen 10 kilometres of shoreline that winds up in Medicine Hat.
SEAWA head Stuart Murray says a better managed creek improves safety and water quality for rural and city residents.
“We will work with landowners to see what can be done,” said Stuart.
Phillips said planning for drought is as important as planning for floods.
“We’re seeing stewardship efforts up close,” said Phillips. “These would be easy projects to cut … but they are the kinds of projects that move us forward. It’s really important not to lose that stewardship ethic.”