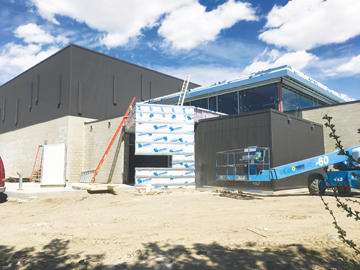 Photo by Justin Seward - The new Schuler School's outer structure is currently being constructed. The project should be complete by early June.

By Justin Seward
After breaking ground in late 2015, the $7.5 million Schuler School replacement project  is near completion and will provide  students and staff with  a refreshing image for education.
“The excitement’s growing,” said Schuler School principal Jason Duchscherer. “Even when the community  drops in, they’re like ‘Wow, it looks awesome. It looks like an amazing school.’”
Duchscherer said the new school will be beneficial in transforming the school’s education process.
“The new school is built around collaboration and natural light,” said Duchscherer. “(It is) really following the philosophy of Alberta education and a higher education and having the building to do that in. It’s going to completely transform how we teach and learn at Schuler School.”
The main structure is about a  month away from completion, while the school is still awaiting for the re-locatables because the road ban is making it difficult to get them to the facility. “When they get here I’m not sure how much time they need to connect the re-locatables to the rest of the school,” said Duchscherer.  “But as far as the permanent structure, the gym floor and the stage are next, and after that they’re getting close to being done.”
The students are expected to have an amazing experience when they walk into the doors next year, where  the beautiful learning commons will catch several kids eyes with the new furniture and the state-of-the art video conference centre, project rooms and the bigger gym, which is twice the size of the old one.
Duchscherer said the most important aspect of the old school that will be carried forward is the traditions of the sports programs, small class sizes and the friendliness of the staff and students.
Project manager Brian Frey said despite the early hurdles with the borderline soil conditions and problems with the  delivery of products, that the project has gone according to schedule. “We just dealt with each one as it came up,” said Frey. “The project is big enough that if you had to wait for one aspect of it, then you can do other things. You’d like everything to go perfect but they never do.”
Frey mentioned the school  was a  non-traditional design because the library is much smaller than you would normally see due to the expanding technology and less people looking at books. The architect was trying to convince the builders not to put a library in because of the decrease in readership but with it being a community school, the project received grants from the local area grazing society.  The funding allowed for additional pieces be built on such as the bigger gymnasium and a community kitchen.
“I think having a nice school is really important,” said Frey. “Obviously every small community in western Canada is suffering from people packing up and moving to the city. There’s towns dying all over the place. I think for Schuler to get a new school now especially with shrinking enrollment is a good thing. It’s a nice building and I’m happy with it.”
Teachers are expected to start transferring over in early June.