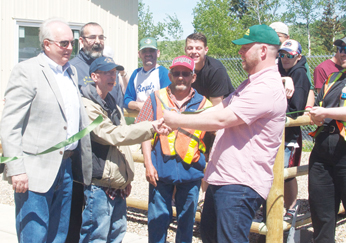 Photo by Justin Seward - Pictured, from left: Richard Laing, chair for the Venturers Society board,, Harvey Kimmel, Brian Dodds, and Jarrid Jenkins, manager for Alberta Parks-Cypress Hills did an official ribbon-cutting for the Venturers new home base on May 31.

By Justin Seward
The Venturers Society Medicine Hat teams, Dire Wolves and Badgers, now have a place to call home base after an official  ribbon cutting ceremony in Elkwater  Wednesday afternoon.
The new Cypress Hills Home Base comes after 13 years of shifting from building-to-building in Cypress Hills Provincial Park.
Venturers is a society of eight groups with five participants on each team between Calgary and Medicine Hat  that teaches adults with developmental disabilities about physical, emotional and intellectual development.
Medicine Hat participants travel five days a week to Cypress Hills Provincial Park to get involved in a variety of activities including garbage clean-up, shoveling snow and wood collecting.
“Today we’re celebrating the opening of this amazing new home base,” said Venturers chair of the board Richard Laing.
“ I will say again with your eyes you will see this place as a lunch room,  a place to escape the elements, a place to socialize. But when you use your heart you again will see something different. You’ll see a commitment from   Venturers, to this park and  community that we will stay here.”
Laing added the home base is a testament to their theme of “Nurturing is Nature: Achieving in the Community,” because it will allow the teams to be able to learn about  the natural surroundings while doing good deeds in the community.
Badgers team leader Sonia Gretchen said once construction began in April 2016 that all the team members had a role in building the interior of the home base. They did anything from the insulation to building the kitchen tables to painting the trim.
“It means a lot because they learn new skills,” said Gretchen.
“And they see what they learned come together to the finished product, which is the new lunch room everybody likes. It’s all a part of our big team that got together and put it altogether.”
She added that despite the members already being a part of  the parks staff before the facility, that now the new home base   gives them more of a sense of belonging with their own cubby holes and quarters, which will expand their park duties.
The  Dire Wolves and Badgers moved into the Cypress Hills Home Base back in September.