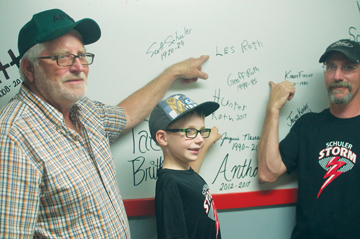 Photo by Justin Seward - Three generations of Schuler School students; Lest, Hunter, and Geoff Roth, wrote their names on the wall as part of the farewell tour of the old school on June 24.

By Justin Seward
Over 200 students, past and present, and their families reminisced the memories one last time at the old Schuler School on June 24 before it closes its doors for good at the end of the school year, where staff and students prepare to move into the new state-of-the-art institution in the fall.
People had the opportunity to spike a  volleyball over the net in the tight confines of the old gym, sign their names on the wall and collect their old Schuler Storm uniforms from their time in school athletics.
Kristen Krassman attended Schuler School until she went to Eagle Butte High School where she graduated in 2016.
“Some of us that lived right by Schuler, it was pretty cool just to be able to come two minutes and you were at school,” said Krassman.
“It was a really good learning environment for all of us.”
Krassman’s remembered her social studies class for the creativity.
“I remember the one time (in social studies) for the Boston Tea Party, we actually had a tea party,” said Krassman.
“We had to dress up. Then another time we had a paper war for one of the wars that happened. It was just really fun.”
Chloe Herman said going to Schuler School was like learning with family whether you were related or not because you spent so much time together.
“It just so close knit and learning was so much easier with people you felt comfortable with,” said Herman.
“It was just happy and home. It was definitely just  so much fun and exciting to come to school every day and learn with the teachers to grow that relationship more and more.”
Herman added the new school with bring a new educational experience with being more interactive, bright, inviting and more appreciation for learning.
Les Roth went to Schuler School in the ‘60s and took in the farewell  tour  with his grandson Hunter and son Geoff where he remembered how much the school meant to the community.
“The school was the center of the community and everything revolved around the school like the social activities, the sports events and the friendships ,” said Roth.
“Basically everything was school orientated, more so years ago than it is today. It was a good thing to come to the Schuler School. We’re all farm kids and we all have an  interconnection of ‘what happened when your doing chores this morning.’ Being from a farming community and having kids doing all the same things you do created a bond. It was a great time overall being a kid and going to this school.”