How to farm smarter 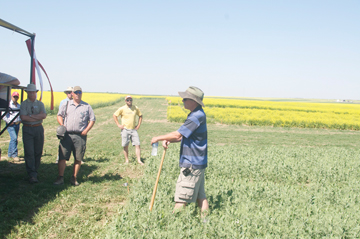 By Justin Seward
Local area farmers were able to learn more about dryland crops from five crop scientists during the annual Farming Smarter Medicine Hat tour stop  at a testing site near Veinerville on July 6.
“We’re passing on information on crops that are new to the area and some that are old,” said Ken Coles, general manager for Farming Smarter.
“We try to attract them in with innovative stuff like our hail research. The work with our dryland corn, grain corn and using a precision planter for canola. That’s all novel practices and some of the old ones we just finished talking about has been around a long time but their always new developments.”
The focus of the day long event was for the crop scientists to give their talks and allow the crowd  to ask questions as to what their issues are.
“If there is opportunity for certain crops or cropping  practices then we used that as a feedback mechanism to drive what it is we do ,” said Coles.
Coles said the research is a slow and steady process and the interesting results come from the precision planters for canola and there is always adaptations that can be done with the adjustment of drills for the environment.
Farming Smarter had introduced a hail project where a machine was built to beat up crops to study their recovery period.
According to Coles, there are products on the market that aid in the crop’s recovery and has now become unbiased science based information.
“That’s a lot of the value that we do is it’s scientific, empirical, statistically valid data that we generate to help farmers make better decisions,” said Coles.
Alberta Pulse Growers (APG) contractor Rob Dunn talked to the crowd about the Alberta Pulse Plot to Field program that is happening in eight co-operator  locations in the province.
The program was launched in January 2016 with a focus on moving small plot research towards applicability on an individual farm basis.
Dunn was one of the three agronomists chosen to conduct a field study where he had to find three farmers in his prospective area to help in the proof of concept phase.
“They identified a plant population comparison for peas,” said Dunn.
“In southern Alberta we have a site at Lomond, Mossleigh and Claresholm and each of those sites we have a field scale trial where we’ve got a replicated and a randomized of three plots. We’ve been spending fall, winter and spring developing protocols on a methodology where we can go forward into some more complicated trials if we’re going to do some comparisons with fungicides or some other features.”
Dunn said a methodology would be beneficial because it would test the willingness of the farmers because the project is acting like a full day operation for planting operations along with its preparation.
Cypress County agricultural supervisor Jason Storch said the county has long been supporter of the Farming Smarter dating back eight years ago because the farmers can experience the different growing conditions between Lethbridge and Cypress County.
“I think advantage to Farming Smarter is that there has been a demand for that again at their location, southern Alberta, huge agricultural land base and having a location for to do dryland research is been valuable ” said Storch.
“I think there is a great deal of information that’s presented here and it’d be great to see more guys come out but we have a core group of followers that make the effort to come and learn.”