Lentz wants to continue to provide ‘rural’ perspective; will run in upcoming election 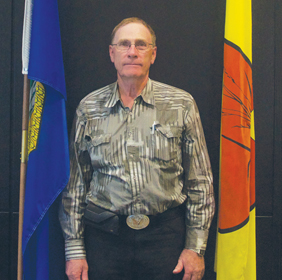 Photo by Justin Seward - Garry Lentz, Cypress Couty councilor for Ward 4, has announced he is looking to retain his seat in the upcoming fall election.

By Justin Seward
Cypress County councillor Garry Lentz will be looking to retain his Ward 4 seat on council this fall after declaring his candidacy recently.
Lentz has been on council for 16 years and feels as though he gives a  sense of what rural living entails  as he has grown up in the area his whole life .
“I’ve had a lot of people encouraging me to run,” said Lentz.
“I’m one of the few really true rural councilors left on county council. (In) our last election, we saw an unprecedented number of urbanites getting elected to council and I’m afraid if that trend continues, the county is going to lose its rural atmosphere. Our rural people are going to lose some of the advantages.”
He added he would like to see more rural people getting involved and coming forth in the upcoming election as he does not want to see councilors get re-elected by acclamation.
“I think in this day and age that the competition is good for everybody and I would like to see a stronger rural representation on county council,” said Lentz.
“Something I often remind council of is that about 60 per cent of the county’s tax revenue comes in from the oil and gas sector linear assessment and that is all generated out in the rural areas. So it’s the people living in those rural areas that have to put up with the traffic and the dust it creates.”
The dust and traffic are hard on the roads and he would like to see more roads oiled and paved, while getting more dust control treatment.
Other projects that will provide a source of tax revenue for the county will be the wind and solar projects  because as it stands the money is spent in the hamlets on water infrastructure and streets.
“It seems like the rural residents get the short end of the stick when it comes to allocation of funding for those types of projects,” said Lentz.
If re-elected, Lentz would like to see projects such as the Cypress Water Co-op Ltd., carried through, while he feels  the creation of the Dunmore Fire Hall is going to be an advantage to people in the local area because residents will be living closer to a fire hall and fire insurance rates will decrease for a lot of people.
When asked about Robin Kurpjuweit being his competition for Ward 4, the answer was fairly simple.
“I’ve fought numerous elections before,” said Lentz.
“ I look forward to the challenge. I like getting out there and meeting rate payers every chance I get discussing and answering questions for people.”