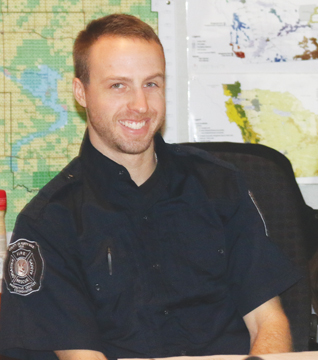 Volunteer firefighters in the County of Forty Mile had a very busy few weeks, with grassfires erupting almost every day and in some cases, more than one on the same day.
County fire chief, Dustin McGarry said each volunteer fire department has dealt with multiple fires in the month of july and accummulated more than 500 volunteer hours, noting that not all of the figures for the month had yet been calculated.
“This July was insanely busy for all County of Forty Mile Volunteer Fire Departments. Twenty-Five wildland fires were actioned by County Volunteer Firefighters with the largest fire being 2523 hectares (5745 acres). Over 500 hours of selfless time was donated by County Volunteers to help battle the blazes in between working, farming, and spending time with their families,” said McGarry in a written statement.
A massive grassfire in mid-July that initially was thought to have torched 2,900 hectares, accounted for 2,523 hectares. Initial Alberta Agriculture and Forestry GPS reported it to be 2,900 hectares, but further mapping indcated it to be slightly smaller. Volunteer firefighters from throughout the County of Forty Mile, Cypress County, County of Warner, and some crews from Montana helped battle the fire that was started by lightning strikes.
McGarry noted that if it wasn’t for the dedication of the many volunteer firefighters, as well as landowners who help out, the busy fire season would be a lot harder to handle.
“These extraordinary people are just regular citizens who attend regular training on their own time to help keep their communities safe. Every single second of effort that each one of these firefighters puts in is appreciated and without them these fires would create a lot more destruction.”
Bow Island’s volunteer fire department has assisted with number of grassfires in the county, accummulating 138 hours in July, up significantly for the same period last year.
“Last July and August 2016 combined hours were 65.5 and the next closest hours for the month of July was back in 2003 with 60 hours,” said Bow Island fire chief, Kelly Byam.