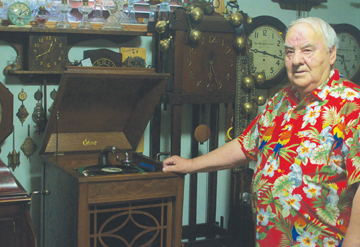 Photo by Justin Seward - Medicine Hat's Tony Schlachter showed the Cypress Courier a 1910 diamond-tip record player from his antique collection. Some of his antiques will be displayed at a dance in Redcliff later this month.

By Justin Seward
Tony Schlachter has had the collecting mindset since he was child growing up on a farm near Bow Island and now he has several hundred antiques on display in what some term his personal museum at his Medicine Hat home.
Old telephones, gramophones, Medalta Pottery, pins, record players, farming equipment and high test gas lamps are a fraction of what he has on display.
“It just happened,” said Schlachter.
“There was always old stuff around when I was kid and I got interest in a lot of it over the years. I guess my dad didn’t throw anything away. He had his iron pile and he had his wood pile which were valuable in those days but not today.”
Many of the antiques came from the farm, antique sales and neighbours who were throwing away collectibles and more often than not when he went to Bow Island for coffee there would be an item laying in the back of his pick up box knowing he would take it home.
“It use to get pretty comical sometimes,” he said.
“And just interested in a lot of the artifacts and having some around, it just creates more interest. A part of it is ownership it seems like to own some of this stuff, especially the hard to fine pieces. Collecting becomes competitive amongst collectors to some degree and as you go through the years you (salvage) other pieces for all you can get and in the end you become such friends you just give it away.”
He added to be able to recognize things sitting in a junk pile has helped him over the years to pick an antique out which was the most valuable item in the stack.
What is important to him is the preserving of local pottery as he has bought pieces off of local estates that he has returned to families because through the years they have realized the antique has meant something more.
“I think family items should be kept in families as much as possible,” said Schlachter.
“Like your road shows on TV have probably shown what articles are sometimes worth to a family if they only had them back. The ones that still have something tend to hang on to them for at least another generation.”
Schlachter’s vast collection of antiques will be put on display at the Old Times- Hard Times Dance at the German Canadian Harmony Hall in Redcliff on Sept. 23 from 7:30 p.m.- 11 p.m.