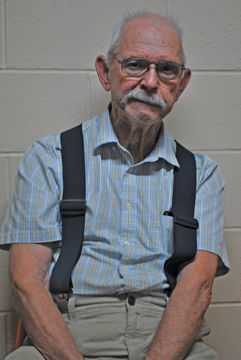 Photo by Jamie Rieger - Alan Hyland announced last week that he would be seeking another term on Bow Island town council.

By Jamie Rieger
Bow Island councilor Alan Hyland says his work isn’t finished and has decided to run for another term in the upcoming municipal election.
“The (sprinkler) project at the Lodge is one of them,” said Hyland, adding that installing a sprinkler system at Pleasant View Lodge has been a priority item for quite some time.
Hyland said some consideration was given to the four-year term that councilors must now sit for. There used to be three-year terms for municipalities.
“A three-year term made it a lot easier. I’ll be 76 at the end of the four-year term, but there is no other way to do it,” he said.
Hyland first entered politics more than 40 years ago, starting as a Bow island town council in a byelection when somebody had stepped down.
From 1975-93, Hyland served as MLA for the region.
“It was an interesting time in politics then. It was Loughheed’s second term and I was part of the Medicine Hat federal party,” said Hyland. “In ‘75, I won by three votes.”
He held the seat for two more terms, winning again in 1979 and 1982. When the Cypress-Redcliff electoral district was formed, he ran in the 1986 and again in 1989.
Hyland exited politics for a few years in the mid-1990s to focus on his family, but remained active in community activities, having served as president of Minor Sports, sitting on the Spud League board, among others.
“I was still doing things in the community even though I wasn’t active in politics at the time,” he said.
It was then that he was asked to run for mayor, which he did and won.
As mayor, Hyland started attending the mayors and reeves meetings and was soon involved in establishing the Palliser Economic Partnership, an organization focused on improving economic development in the Palliser region of southeast Alberta.
Hyland, along with then County reeve, Leonard Mitzel, were instrumental in getting Family and Community Support Services going province-wide.
Hyland considers PEP and FCSS as two of his greatest accomplishments as a politician.
“I was mayor until Gordon Reynolds ran. Then I want back to council and that was a good move,” said Hyland. “When I take a position on a committee, I don’t just take it to be on a committee. I am active on it and you have to listen to the people,” he said.
He noted that currently, as a municipal politician, there are frustrations in trying to get work done in the community when there is little communication coming from the provincial NDP government.
“It is hard to make decisions based on information we can’t get. For years, we have done revamps on our infrastructure,” said Hyland. “We are ahead of other small communities when it comes to that. We’ve set our priorities and have stuck with them. We wouldn’t pave a street until the sewer and pipe were replaced and I think now, the water and sewer line from School Cres. is the only one we have left.”