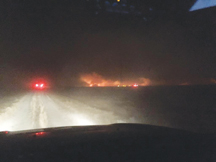 Cypress County fire services received a call from CFB Suffield on Sept. 11 between 7 p.m. and 8 p.m. for one engine and one squad to be forced into action to fight a 25-mile long grass fire between the Special Areas and Bindloss.
“They were requesting additional units to help with fire north of the military training area,” said Cypress County fire chief Kelly Meyer.
Later there were calls to Meyer’s deputy for more assistance in the Jenner and Youngstown area.
The fire spread from Jenner to Hwy 41, first moving north and then south, said Meyer.
Cypress County sent a total of 20 volunteer firefighters into fight the over night blaze.

“With us working together, just knowing that our neighbouring municipalities can call upon us, we’ll come help and vice versa,” said Meyer.
“At the end of the day it’s communities helping each other and getting the job done.”
It was just before 8 a.m. on Sept. 12 that fires crews were released.
According to the Special Areas board Facebook page, the mandatory evacuation was lifted at 9 a.m. for the residence east of Range Road 23 and south of Highway 555.