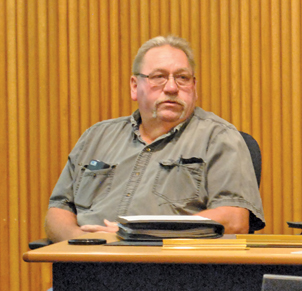 Photo by Jamie Rieger - Frank Sleeking, president of the Golden Sheaf Park association and Kirby Winkler (not pictured), head of the grounds committee, approached County of Forty Mile council for guidance as the park looks to develop on the north side and remove a section of the park that sits on a road allowance.

By Jamie Rieger
A decades-old development at Golden Sheaf Park has had delegates meeting with County of Forty Mile council to look at options for the park to move forward.
The development in question involves a shelterbelt and campsites on the west side of the park that had been placed on a then unused road allowance.
The county has since been approached by a developer who would need access to that road allowance in order to build, leaving the county with no option but to have the park move the campsites and row of trees. The park has plans to develop on the north side of the park, but is in the preliminary stages of the development.
Frank Sleeking, president of the park association and Kirby Winkler, head of the grounds committee for Golden Sheaf Park met with county council on Sept. 13 to discuss options.
Reeve Bryne Lengyel indicated that the park could leave the trees where they are for the time-being, but the campsites need to be removed.
“They can leave the shelterbelt there, but they need to get the development off. It’s our road allowance,” said Lengyel, noting there could be liability issues at play if the sites are left in place.
Coun. Ron Harty argued that the sites had been in place for decades and have not been an issue in the past.
“It’s been there for 50 years and hasn’t hurt anybody. Talk about being an ogre. They’ve put a lot of work into it and the services that were there have been taken care of,” said Harty.
County planner, Nathan Ogden said the county needs to have professional plans to see what the development future looks like for Golden Sheaf Park as a whole, and for the north side addition.
“We want to see a plan by professionals for the park; for example, an emergency plan, plans for public space and parking. We don’t have your vision of what the new land is for,” said Ogden.
County administrator, Dale Brown said that the plans also need to include how the park plans to manage traffic flow.
“The gatehouse would be moved to the new area,” said Winkler, noting that they plan on moving it in October.
“The gatehouse would be set up like at Elkwater, where they park and walk to the gatehouse,” said Sleeking, adding that trees would be planted on the north end of the park.
The park has a tree farm that could be relocated to the north side development, but Winkler said that is a long way from happening.
“Waterlines will be the first thing to go in before we start moving trees,” he said.
Sleeking asked why the park can’t keep the campsites where they are until the county needs the road allowance for development in the area.
“Why not give us the option to use it until you decide to develop it?” asked Sleeking.
“Because you can’t develop on an open road allowance. The public has a right to use it,” said Brown.
Lengyel said that while the park has good ideas for future development, they need to get formal plans in to the county.
“You have great ideas. Now, you just have to get a plan to Nathan,” said Lengyel. “This will give council a better understanding.”