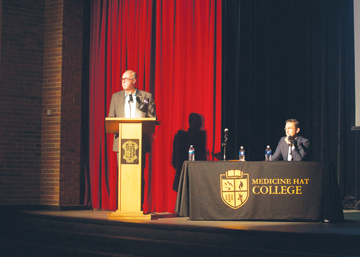 Photo by Justin Seward - During a town hall meeting at the Medicine Hat College on Sept. 22, MP Glen Motz and shadow minister of finance, Hon. Pierre Poilivere, talk with a packed theatre of citizens who wanted to hear about the negative effects the new Liberal tax is going to have on small businesses and farmers.