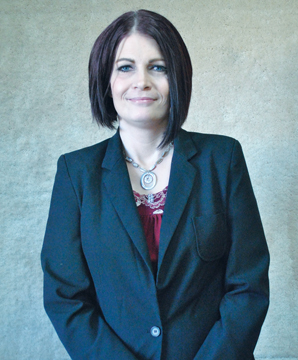 Photo by Jamie Rieger - Shannon Strom believes in working as a team to make decisions on town council.

By Jamie Rieger
Shannon Strom believes she can bring new ideas to Bow Island council and is running because she feels she can make a difference.
After living away for a number of years, Strom moved back to her hometown about six years ago.
“I’ve spent 20 years working in the tourism industry, and specifically in the hotel industry, I’ve managed hotels in Alberta and British Columbia,” said Strom, who grew up on a farm in the area.
“I came back because my dad was living in town and this is an excellent place to raise your kids,” she added.
Since moving back, Strom has been involved with Lions Club and Bow Island Health Foundation.
“I love Bow Island. It’s an excellent place to raise a family. “I love the small town feel of Bow Island,” she said.
She is the granddaughter of former Alberta premier Harry Strom and hopes to carry on with the family legacy.
“He was premier from 1968-71 and I would like to carry on his legacy,” she said.
Strom also said that she believes in working as a team and in listening to the people to make community decisions.
“I believe in listening to the community and in making decisions as a team. I want to be able to contribute my ideas, like having more programming and activities for families and of course, making sure our infrastructure is being maintained,” she said. “Town council has been doing a good job, but there is always room for improvement.”