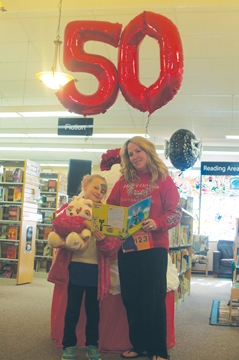 By Justin Seward
The Redcliff Public Library opened its doors current location on Oct. 14, 1967 and now 50 years later to the day held a celebration for the milestone occasion.
In 50 years, the library has only had four managers and not a lot of staff turnaround.
Reita Wilson was the library’s manager for 25 years before retiring in 2009 and enjoyed every minute of helping people with their literacy interests.
“It’s unbelievable the time has gone by so fast and I loved it here,” said Wilson.
“I think it’s been very important to the community that we have something like this here. The library needed a bigger place and they built this one.”
The reason for the Redclif Public Library being successful in her view was because of the staff.
“They always went out of their way to help people,” she said.
During her tenure she over saw renovations and the arrival of the computers to the building.
Wilson still finds herself coming into the library twice a week to find her favourite books between a fiction or a murder mystery and catch up with people she knows.
Current Redcliff Public Library manager Tracy Weinrauch replaced Wilson when she retired and she sees the Town of Redcliff giving great support to the library after all these years.
“I thinks it’s huge,” said Weinrauch.
“When you think about 50 years ago today at this date and time, they were celebrating the grand opening of the Redcliff Centennial Library and how things must have been different back then as to what your seeing in the library now. I think it’s huge we evolved with the times. Sometimes things aren’t easy to change but we’ve had great success with it.”
She said their focus has been on providing the best customer experience possible with the staff, training days, learning about the new e- resources and anything they can help the people with.
“We offer the meeting space just for people to come in and sit and visit and have that coffee,” said Weinrauch.
“Other then the bakery coffee table, there’s not a lot of places to that in Redcliff.”
Weinrauch added for the next 50 years, her guess is as good as anyone’s that there is the possibility of a book less library where everything will be going the way of digital.
Redcliff mayor Ernie Reimer said on Saturday the town continues to collaborate with the public library because it is important to the community.
“It’s a good feel building,” said Reimer.
“It’s important that we encompass everybody in the town. It doesn’t matter what age that they can use this facility, to come here and read the newspaper or just hang around and have a coffee.”