Local firefighters step up to help neighbours in Cypress County 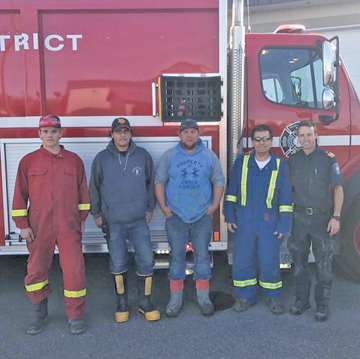 By Jamie Rieger
It was a pretty easy decision for County of Forty Mile fire chief, Dustin McGarry to make last Tuesday when he learned that massive grassfires were burning in Cypress County under extreme wind conditions that were downing power poles and sparking fires throughout southern Alberta.
McGarry heard Cypress County communication on their radio system and was quick to respond to offer help.
“It sounded like they really needed assistance, so I called and offered,” said McGarry, noting that the County sent two fire trucks and eight firefighters; five from the Foremost volunteer fire department and three from Burdett. “They are our neighbours and we are there to help just like they help us.”
McGarry said the wind caused zero visibility, causing problems for those fighting the fires and trying to protect structures.
“It was really, really bad up there. There was zero visibility. “We went into Hilda and Richmound and were all over the area protecting structures,” said McGarry. “It was a complete dust and ash storm. The winds were shifting from southwest to northwest and there were sand dunes of ash everywhere.”
McGarry said a bit of relief came when some rain and a drop in temperature provided some assistance.
“We got some serious rain and the temperature dropped by about 12 degrees. That was enough to help out a lot on the flanks,” said McGarry.
The loss has been enormous, including the loss of Walsh rancher and volunteer firefighter James Hargrave. (See story in this week’s Cypress Courier.)
“A lot of farmers have lost a lot and we feel for all of them. It’s devastating,”
While these crews were dispatched to the Hilda area, a fire burned north of the river near Bow Island. Calls by the Commentator to the Bow Island fire department were not returned.