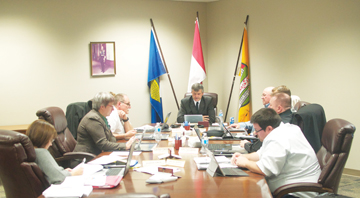 New Redcliff mayor Dwight Kilpatrick oversaw his first council meeting on Oct. 23 and was satisfied with how the proceedings went but knows there is a lot of work to do.
“It was a little different,” said Kilpatrick of being at the head of the table.
“But again I have enough years here that I think I can fake it up there.”
He said now that he is mayor he has received more phone calls about issues but emphasized that he is one voice of seven in the council chambers and is not higher than anyone else.
“I look forward to the next four years,” said Kilpatrick.
“I do really want to get going on figuring our sanitary system so we can grow. It is right now our anchor and we have to figure out a way. Right now it is the impediment of growth.”

Redcliff Public Library board member Catherine Richardson stopped by to give a summary of their upcoming budget and what improvements are being made for programming.
Richardson said the library will be asking the town for more funds because they will be unable to ask Cypress County with them having their own library board.
The library will be faced with the minimum wage increase.
“That is the major driver to the increase we’re asking for this year,” said Richardson.
“That’s pecking our salary costs.”
She presented the ideas the library came up with to reduce costs including programming.
A program that was cut was the Rise Tele-conferencing because there was not enough people to enjoy it to make it worthwhile and free photocopying for job seekers was unsuccessful of being of getting off the ground.
Starting in January, there will be an increase for an adult library card by $2 to bring it to $8 a year. Children’s library cards will be still free.
Council moved to forward further discussion to the budget meeting.
The big project that was completed earlier this year was the refinishing of the meeting room.
“The counters were held together by book tape,” she said.
“Our carpets were looking pretty nasty because we have children’s programming in the library all time. Now we managed to refresh all of that.”
This year the library has 944 cardholders which is an increase of 23 over last year.
There were 45,000 items checked out of the library, while there 15,00 items loaned to other libraries around the province and 15,000 people visited to the Shortgrass portion of the website, 5,000 hours were logged on the computers.
“We have 10 computers in the library,” said Richardson.
“So instead of a bunch of them come do at the same time, we do try and update two a year.”