Cypress County has a new mountie on patrol 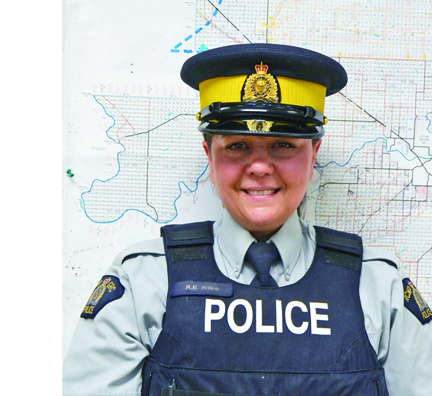 Photo submitted by Rebecca Wilke Redcliff RCMP Const. Rebecca Wilke started her new position as the Cypress County Mountie at the beginning of the year.

The Redcliff RCMP has a new county Mountie as of the beginning of this year.
Rebecca Wilke, who spent the past few years as a constable in the Redcliff detachment, spoke to the Courier about her new position, officially known as the “enhanced officer.”
She said the position allows her to be more active in the various communities she serves throughout Cypress County.
“The goal is just to ensure that Cypress County receives more interaction and positive community policing (that is) over and above what the general duty members do,” said Wilke.
In other words, Wilke is the public face of the Redcliff RCMP throughout the county.
“My goal is to interact with the community and be more visible on the county roads,” she said, adding that her duties beyond policing include attending community functions and meetings.
“I want to part of the community where people know my name, get to know the locals and their needs and concerns, as well as discuss solutions and crime reduction specific to them and their community.”
Wilke is also qualified to teach Drug Abuse Resistance Education, more popularly known as “DARE,” which she said is particularly helpful when she travels to schools and meets with students.
In her new position, Wilke has the independence to determine her own schedule, as she has a wide swath of territory to cover.
“I just kind of make a plan in the morning and go,” she said.
Her previous job in Redcliff was much more of a traditional policing role, responding to calls rather than going out to engage with the community.
Prior to her time in Redcliff, Wilke was an officer in Sicamous, B.C., which is known as the “Houseboat Capital of Canada.”
It was a vastly different community from the one she now serves in Cypress County, as its population was often in flux, with people coming and going to their cabins there for summer vacation.
Wilke comes from a rural upbringing in Saskatchewan, so she understands the general needs of the county areas she’s responsible for in Alberta.
“It’s kind of like a little Texas here,” she said, laughing. “If somebody’s out there and doesn’t understand how to deal with a horse or a cow, or when ranchers have something to say … It’s nice to have somebody who understands.”